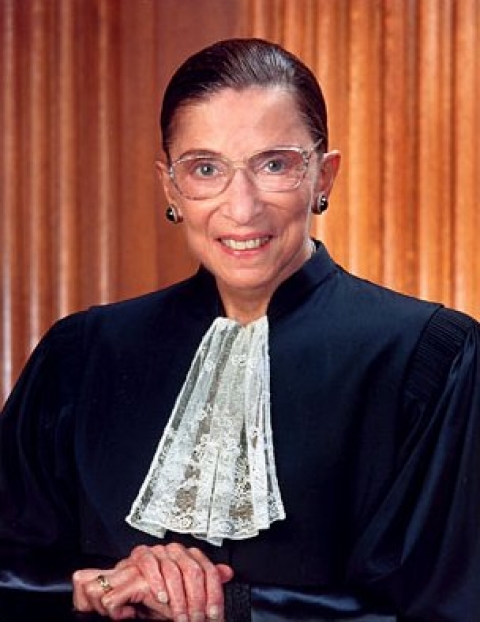 CHICAGO (AP) — U.S. Supreme Court Justice Ruth Bader Ginsburg says she supports a woman's right to choose to have an abortion, but feels her predecessors' landmark Roe v. Wade ruling 40 years ago was too sweeping and gave abortion opponents a symbol to target.

Ginsburg, one of the most liberal members of the nation's high court, spoke Saturday at the University of Chicago Law School. Ever since the decision, she said, momentum has been on abortion opponents' side, fueling a state-by-state campaign that has placed more restrictions on abortion.

"That was my concern, that the court had given opponents of access to abortion a target to aim at relentlessly," she told a crowd of students. "... My criticism of Roe is that it seemed to have stopped the momentum that was on the side of change."

The ruling is also a disappointment to a degree, Ginsburg said, because it was not argued in weighty terms of advancing women's rights. Rather, the Roe opinion, written by Justice Harry Blackmun, centered on the right to privacy and asserted that it extended to a woman's decision on whether to end a pregnancy.

Four decades later, abortion is one of the most polarizing issues in American life, and anti-abortion activists have pushed legislation at the state level in an effort to scale back the 1973 decision. This year, governors in North Dakota and Arkansas signed strict new abortion laws, including North Dakota's ban on abortions as early as six weeks into a pregnancy.

Ginsburg would have rather seen the justices make a narrower decision that struck down only the Texas law that brought the matter before the court. That law allowed abortions only to save a mother's life.

A more restrained judgment would have sent a message while allowing momentum to build at a time when a number of states were expanding abortion rights, she said. She added that it might also have denied opponents the argument that abortion rights resulted from an undemocratic process in the decision by "unelected old men."

Ginsburg told the students she prefers what she termed "judicial restraint" and argued that such an approach can be more effective than expansive, aggressive decisions.

"The court can put its stamp of approval on the side of change and let that change develop in the political process," she said.

A similar dynamic is playing out over gay marriage and the speculation over how the Supreme Court might act on that issue.

The court decided in December to take up cases on California's constitutional ban on gay marriage and a federal law that denies to gay Americans who are legally married the favorable tax treatment and a range of health and pension benefits otherwise available to married couples.

Among the questions now is whether the justices will set a nationwide rule that could lead to the overturning of laws in more than three dozen states that currently do not allow same-sex marriage. Even some supporters of gay marriage fear that a broad ruling could put the court ahead of the nation on a hot-button social issue and provoke a backlash similar to the one that has fueled the anti-abortion movement in the years following Roe.

The court could also decide to uphold California's ban — an outcome that would not affect the District of Columbia and the 11 states that allow gay marriage.

Ginsburg did not address the pending gay marriage cases.

Asked about the continuing challenges to abortion rights, Ginsburg said that in her view Roe's legacy will ultimately hold up.

"It's not going to matter that much," she said. "Take the worst-case scenario ... suppose the decision were overruled; you would have a number of states that will never go back to the way it was."