Indonesian police shaved transgender women and made them dress as men 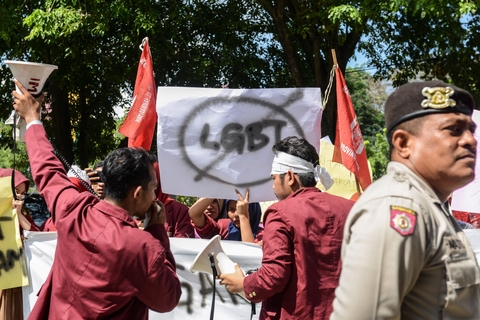 A group of Muslim protesters march with banners against the LGBT+ community in Banda Aceh on December 2017. CNN photo.

(CNN) -- Police in a conservative province of Indonesia forcibly shaved the hair of a group of transgender women and made them wear men's clothing, state media reported, in a crackdown on the LGBT+ community that has horrified human rights activists.

The police chief said his men had shaved the women's hair off and given them men's clothes to wear, as part of their "coaching" to "become men."

"In addition, the officers also nurtured them by way of having them run for some time and telling them to chant loudly until their male voices came out," he said.

Surianata said the operation had been part of a campaign to prevent LGBT+ people from "adversely affecting" Indonesia's next generation. The women were taken to a police station for "further guidance," Antara said.

The police chief later told CNN that the operation began as a response to complaints that women in the salons had been offering free services at their salons to high school boys, as well as reports of drug use in the area. He denied that it was specifically an anti-LGBT+ operation.

Aceh province, situated on Indonesia's northwestern tip, is the only part of the country ruled by Islamic Sharia law.

In May 2017, two young men were caned more than 80 times after being found guilty of having homosexual sex. They were caught after neighbors barged into their apartment, carrying camera phones.

Tunggal Pawestri, an Indonesian human rights activist, told CNN it was "crystal clear" police had violated the human rights of the transgender women in Sunday's raids.

"I also feel worry for the mental and health condition of the transgender people who were arrested," she said.

The raids and arrests are just the latest phase of a brutal crackdown on LGBT+ people in Indonesia in recent years, which has horrified activists.

Since 2015 there have been raids on gay saunas, calls for the criminalization of homosexuality and statements made by prominent politicians about the evils of LGBT+ rights, with one saying it was more dangerous to Indonesia than "nuclear war."