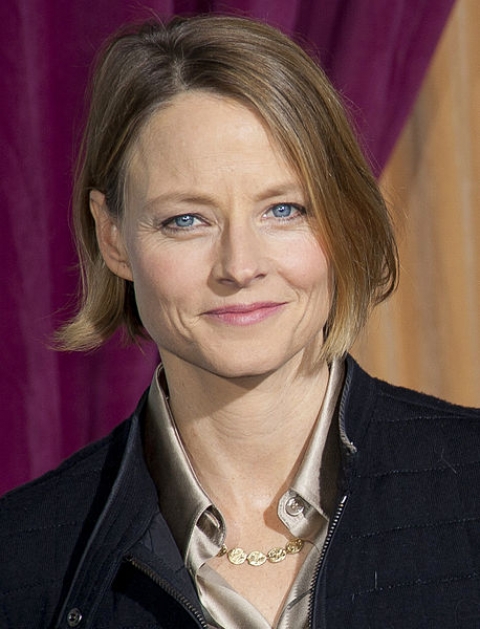 Jodie Foster, pictured above in 2011, came out (or not) at a fun filled Golden Globes Sunday night. Picture by Tom Sorensen.

BEVERLY HILLS, Calif. (AP) — "Argo" is in big with the Golden Globes, but not so much with the Academy Awards. "Lincoln" is sitting pretty with the Oscars but was mostly left out in the cold at the Globes.

Sunday's Globes left the Feb. 24 Academy Awards picture still muddled, with the Iran hostage thriller "Argo" winning for best drama and director for Ben Affleck, a prize he already knows he can't win at the Oscars, where he wasn't even nominated.

The night featured former President Bill Clinton getting a standing ovation after introducing "Lincoln" and Jodie Foster coming out without really coming out as this year's winner of the Cecil B. DeMille Lifetime Achievement Award.

Foster joked that celebrities are now expected to reveal they're gay "with a press conference, a fragrance and a prime-time reality show." She declined: "My reality show is so boring."

One thing not so boring this year were hosts — Amy Poehler and Tina Fey, who were given credit for being charming, irreverent and hilarious.

Besides the three wins for "Les Miserables" and two for "Argo," the show was a mixed bag, with awards spreads around a number of films.

Steven Spielberg's "Lincoln" came in leading the Globes with seven nominations but won only one award, best actor for Daniel Day-Lewis. "Lincoln" also leads the Oscars with 12 nominations, with Spielberg, Day-Lewis and co-star Sally Field all in the running for possible third Oscars.

"If I had this on a timeshare basis with my wonderful gifted colleagues, I might just hope to keep it for one day of the year, and I'd be happy with that," Day-Lewis said.

Other acting prizes went to Jennifer Lawrence as best musical or comedy actress for the oddball romance "Silver Linings Playbook" and Christoph Waltz as supporting actor for the slave-revenge tale "Django Unchained."

"Thank you for this lovely blunt object that I will forevermore use as a weapon against self-doubt," Hathaway said, cradling her trophy.

Jackman was a bit hoarse from the flu, but his Globe win seemed to be the right antidote.

"I was kicking myself for not getting the flu shot, but it appears that you don't need one. I feel great," Jackman said.

But when it comes to Hollywood's highest honors, "Les Miserables" has the same obstacle as "Argo," also failing to earn a best-director slot for filmmaker Tom Hooper at the Oscars.

Clinton upstaged Hollywood's elite with a surprise appearance to introduce Spielberg's "Lincoln," which was up for best drama. The film chronicles Abraham Lincoln's final months as he tries to end the war and find common ground in a divided Congress to pass the 13th Amendment abolishing slavery.

Lincoln's effort was "forged in a cauldron of both principle and compromise," Clinton said. "This brilliant film shows us how he did it and gives us hope that we can do it again."

Lawrence won as best actress in a musical or comedy for her role as a troubled widow in a shaky new relationship. The Globe winners in musical or comedy categories often aren't factors at the Oscars, which tend to favor heavier dramatic roles.

But "Silver Linings Playbook" is a crowd-pleasing comic drama with deeper themes than the usual comedy. And Lawrence — a 2010 Oscar nominee for her breakout film "Winter's Bone" who shot to superstardom with "The Hunger Games" — delivers a nice mix of humor and melancholy.

"What does this say? I beat Meryl," Lawrence joked as she looked at her award, referring to fellow nominee and multiple Globe winner Meryl Streep. Lawrence went on to thank her mother for believing in her and her father for making her maintain a sense of humor.

Waltz won supporting actor for his role as a genteel bounty hunter who takes on an ex-slave as apprentice in Quentin Tarantino's for "Django Unchained.

The win was Waltz's second supporting-actor prize at the Globes, both of them coming in Tarantino films; he previously won for "Inglourious Basterds."

"Let me gasp," said Waltz, whose competition included "Django" co-star Leonardo DiCaprio. "Quentin, you know that my indebtedness to you and my gratitude knows no words."

Tarantino won the screenplay prize for "Django Unchained." He thanked his cast and also the group of friends to whom he reads work-in-progress for reaction.

"You guys don't know how important you are to my process. I don't want input. I don't want you to tell me if I'm doing anything wrong. Heavens forbid," Tarantino said. "When I read it to you, I hear it through your ears, and it lets me know I'm on the right track."

The Scottish tale "Brave" won for best animated film. It was the sixth win for Disney's Pixar Animation unit in the seven years since the Globes added the category.

Austrian director Michael Haneke's old-age love story "Amour," a surprise best-picture nominee for the Oscars, won the Globe for foreign-language film. The top prize winner at last May's Cannes Film Festival, "Amour" is a grim yet moving portrait of an elderly woman tended by her husband as she is incapacitated by age.

"Oh, my God!" Adele gushed repeatedly, before offering gratitude to the group that presents the Globes. "I'd like to thank the Hollywood Foreign Press. I never thought I'd say that."

The prize for musical score went to Mychael Danna for the lost-at-sea tale "Life of Pi."

Show hosts Fey and Poehler, who co-starred in the 2008 big-screen comedy "Baby Mama," had a friendly rivalry at the Globes. Both were nominated for best actress in a TV comedy series, Fey for "30 Rock" and Poehler for "Parks and Recreation."

"Tina, I just want to say that I very much hope that I win," Poehler told Fey at the start of the show.

"Thank you. You're my nemesis. Thank you," Fey replied.

After that, Fey and Poehler showed up on stage with cocktail glasses, Fey joking that it was time to start drinking.

"Everyone's getting a little loose now that we're all losers," Poehler said.

Among other TV winners, Julianne Moore won a best-actress Globe for her role as Sarah Palin in "Game Change," which also was picked as best TV miniseries or movie and earned Ed Harris a supporting-actor prize. Best actor in a miniseries or movie went to Kevin Costner for "Hatfields & McCoys." ''Homeland" was named best TV drama series, and its stars Claire Danes and Damian Lewis received the dramatic acting awards. Maggie Smith won as supporting actress for "Downton Abbey."