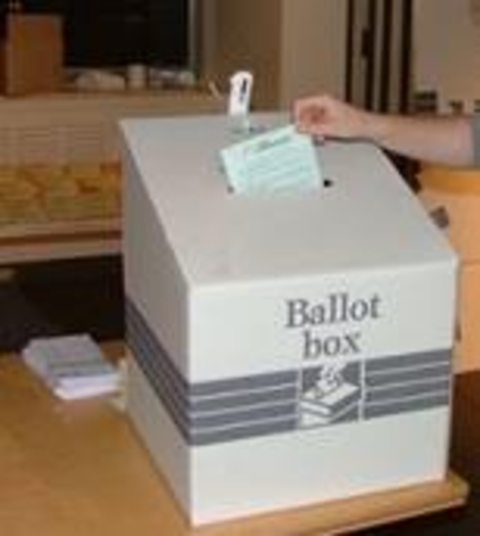 Both states require persons registering to vote to prove their citizenship. File photo.

Both require new voters to provide a birth certificate, passport or other documentation to prove their U.S. citizenship to election officials. The federal registration form requires only that prospective voters sign a statement declaring they are citizens.

Kansas and Arizona asked the federal agency for state-specific modifications, but it refused. The states and their top elected officials — Secretaries of State Kris Kobach of Kansas and Ken Bennett of Arizona, both conservative Republicans — sued the agency last year.

Most voters in both states register with state forms, but their officials said the availability of the federal form created a loophole in enforcement of proof-of-citizenship requirements. Supporters argue the requirements preclude voter fraud by preventing noncitizens from voting, particularly those in the country illegally.

"This is a really big victory, not just for Kansas and Arizona but for all 50 states," Kobach told The Associated Press. "Kansas has paved the way for all states to enact proof-of-citizenship requirements."

Critics of such laws view them as suppressing voter participation. They also said the federal National Voter Registration Act, enacted in the 1990s, was meant to simplify registration across the country and allowed federal officials to reject a modification of the national form.

Jonathan Brater, legal counsel for the New York-based Brennan Center for Justice, said Melgren's ruling, if it stands, would erode Congress' power to protect voting rights. The center represented the national League of Women Voters and its Arizona and Kansas chapters, which intervened in the lawsuit.

"There is a concern that other states could move to pass some of these misguided laws," Brater said. "There can be a copycat effect."

Melgren said the U.S. Constitution gives states the power to set voter qualifications, and Congress has not pre-empted it, even in enacting the 1990s law.

The federal commission and the national League of Women Voters were reviewing the decision Wednesday and not saying whether they'd appeal to the 10th U.S. Circuit Court of Appeals in Denver.

But league President Elisabeth MacNamara said: "Our first impression is that it's a harsh decision and it's a decision that will harm voters."

The federal commission also had rejected a request for a state-specific change in the national form from Georgia, and Jared Thomas, chief of staff to Secretary of State Brian Kemp, said his state will ask the commission to reconsider.

"We applaud Judge Melgren's decision and the good work of Kansas and Arizona in litigating this important issue," Thomas said in an email to the AP.

The proof-of-citizenship laws are part of broader attempt by Republicans nationally to tighten up state voting requirements in the name of fighting election fraud.

"We must ensure citizens are the only ones who vote if we are to have honest elections," said Republican Alabama state Sen. Scott Beason.

But critics contend it can be difficult for some poor, minority and elderly voters to obtain copies of their birth certificates or other citizenship documents.

Brater said college students registering to vote away from their previous homes also may have trouble finding the necessary papers quickly. And Democratic Arizona state Sen. Steve Gallardo, who joined the lawsuit on the side of the federal commission, said a proof-of-citizenship requirement is designed to weed out progressive voters, particularly college students.

"These are new voters that are getting active," Gallardo said. "They tend to be a lot more progressive and liberal ... particularly when it comes to issues like medical marijuana, same-sex marriage, more progressive-type issues."

In Kansas, the registrations of nearly 15,700 prospective voters — enough to decide a close statewide race — remained on hold Wednesday because they hadn't yet complied with the proof-of-citizenship requirement.

Kobach said the state has found "20 or so" noncitizens on its voter registration rolls, but he believes that's only a fraction of the potential number. Kansas has about 1.73 million registered voters.

In Arizona, Attorney General Tom Horne, another conservative Republican, said election officials learned they had more than 200 noncitizens on their rolls when court officials forwarded the names of people who sought exemptions from jury duty because they weren't citizens. Arizona has 3.25 million registered voters.

"There's been a cover-up by the media of the extent to which voter fraud is a problem," Horne said.

Associated Press writers Bob Christie in Phoenix and Phillip Rawls in Montgomery, Ala., contributed to this report.