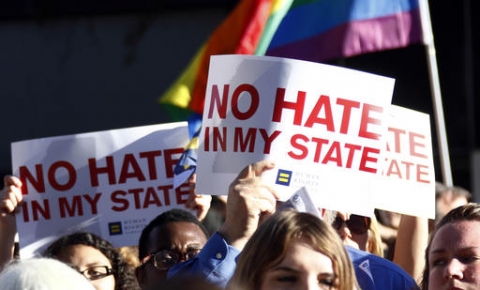 JACKSON, Miss. (AP) — The Latest on reactions to a Mississippi law allowing government employees, religious groups and some private businesses to cite their own religious beliefs to deny services to lesbian, gay, bisexual or transgender people (all times local):

The leader of a national conservative group is praising Gov. Phil Bryant for "extraordinary courage" in signing a law that allows religious groups and some private businesses to deny services to gay and transgender people.

Heritage Foundation President Jim DeMint, a former Republican U.S. senator from South Carolina, hailed his fellow Republican on Wednesday, writing that "to protect religious liberty in his state, he stood up against corporate bullies and leftist pressure groups."

The Heritage Foundation leader says it's wrong to view the bill as "anti-gay" or "discriminatory" and is urging other states to follow Mississippi's example.

Connecticut Gov. Dannel P. Malloy is banning state-funded travel to yet another state that has passed legislation he's criticized as discriminatory.

The Democratic governor announced Wednesday that the cost of travel to Mississippi will not be covered.

Malloy's ban on travel to Mississippi comes days after he barred state-funded travel to North Carolina in response to a new law there that he says discriminates against LGBT people. Last year, Malloy temporarily banned travel to Indiana because of a similar law there.

New York and Vermont banned some or all official travel Tuesday.

The only Democrat in Mississippi's congressional delegation is asking the U.S. Justice Department to file a lawsuit to try to block an incoming state law on religious objections to gay marriage.

U.S. Rep. Bennie Thompson says Wednesday that House Bill 1523, which is set to become law July 1, would give people "the explicit right to discriminate against anyone with a lifestyle they disagree with, in the name of religion."

Thompson is asking U.S. Attorney General Loretta Lynch to file a federal lawsuit against the state over the bill, which was signed Tuesday by Republican Gov. Phil Bryant. It would provide legal protection to government employees, religious groups or private businesses that cite religious beliefs to block services to LGBT people who want to marry or adopt children.

A Justice Department response was not immediately available.

Executives of several companies are calling on Mississippi Gov. Phil Bryant and Republican legislative leaders to repeal an incoming state law that would allow government employees, religious groups and private businesses to cite religious beliefs against same-sex marriage to deny services to people.

The letter says House Bill 1523, set to become law July 1, will create problems for Mississippi businesses to recruit and retain employees and will "diminish the state's draw as a destination for tourism, new businesses, and economic activity."

Some Mississippians say a new law allowing religious groups and some private businesses to deny services to gay and transgender people is needed protection for Christians who adhere to traditional views of marriage and gender roles.

But others say Gov. Phil Bryant's decision Tuesday to sign the bill amounts to discrimination, even if they find same-sex marriage morally offensive.

The reactions came Wednesday as some law professors questioned whether the new state law will withstand legal scrutiny, saying parts of it may violate the First Amendment by favoring particular religious beliefs. They warn other parts of the law may violate the 14th Amendment's requirement for equal protection under the law.

Supporters of the law say they're confident the protections will stand up to challenges.

The Mississippi governor's decision to sign a law that allows religious groups and some private businesses to deny services to gay and transgender people may have headed off opposition in the state's business community, but it could open the state to lawsuits.

Reaction from two large business associations which had released statements opposing the bill was muted, although some individual companies are criticizing the decision.

Copyright 2016 The Associated Press. All rights reserved. This material may not be published, broadcast, rewritten or redistributed.
The Gayly - 4/7/2016 @ 11:40 a.m. CST