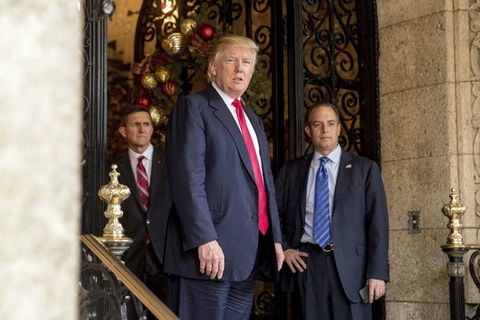 Donald Trump says the truck ramming attack at market in Berlin is an "attack on humanity and it's got to be stopped." AP photo by Andrew Harnick.

Donald Trump says the truck ramming attack at market in Berlin is an "attack on humanity and it's got to be stopped."

The president-elect made the comments in brief remarks to reporters at his Mar-a-Lago estate in Florida following a top-secret security briefing. He said the violence in Germany validates his assessment of Islamic-inspired threats.

With Trump during Wednesday's remarks were his pick for national security adviser, retired Gen. Michael Flynn, and his incoming White House chief of staff, Reince Priebus.

Trump also said he talked to President Barack Obama two days ago, but not since then.

Corey Lewandowski, Donald Trump's controversial first campaign manager, is starting a political consulting firm and will not be joining the Trump administration.

But Lewandowski won't be far. His new firm, Avenue Strategies, will be located about a block from the White House.

Lewandowski led Trump's campaign through his improbable victory in the Republican primary, but he clashed the president-elect's family and was fired. Still, he remains close to Trump and says he considered "multiple opportunities within the administration."

Lewandowski is forming the firm with Barry Bennett, a former adviser to Ben Carson, Trump's nominee to lead the Department of Housing and Urban Development. Bennett also briefly advised the Trump campaign.

A Democratic senator is questioning President-elect Donald Trump's pick for Treasury secretary about his vow to undo some financial regulations and his stake in a bank that profited from the foreclosure crisis.

In a letter on Wednesday, Ohio Sen. Sherrod Brown posed 11 questions to Steve Mnuchin, the former Goldman Sachs executive. The questions range from whether he would be a strong defender of the Dodd-Frank law that imposed financial regulations after the 2008 economic meltdown to whether OneWest, a bank that foreclosed on thousands of homeowners after the housing crisis, got help from the FDIC.

Mnuchin headed a group of investors who owned the bank, which foreclosed on more than 36,000 families in California alone — most in minority neighborhoods — according to the California Reinvestment Coalition. Brown is on the Senate Finance Committee, which will consider Mnuchin's nomination.

This story has been corrected to reflect that Brown is on the Senate Finance Committee, which will consider the Mnuchin nomination. An earlier version said he was not on that committee.

A leader of Donald Trump's transition says the president-elect is no longer interested in his catch phrase "drain the swamp" of Washington.

Former House Speaker Newt Gingrich said his understanding is that Trump "now just disclaims that. He now says it was cute, but he doesn't want to use it anymore." Gingrich made the remark in an interview that aired Wednesday on National Public Radio.

Trump has said he never loved the phrase. But it has continued to be a popular feature on his post-election tour. And his aides say he remains committed to his underlying swamp-draining policies, such as banning outgoing Trump transition and administration members from lobbying for five years.

Transition spokesman Jason Miller said Trump's "ethics reform policies are full speed ahead." Miller added of the new president and his team: "We're going to change the way business is done in Washington and start putting the American people first."

The Israeli ambassador to the United States is urging the incoming Trump administration to move the U.S. embassy in Israel to Jerusalem.

Trump and his nominee for U.S. ambassador to Israel have pledged to move the embassy. But previous Republican presidents have made that promise without following through.

Israeli Ambassador Ron Dermer says it would be a "great step forward" for peace. He tells a Hanukkah reception at the Israeli embassy in Washington that it would send a "strong message against delegitimization of Israel."

The U.S. and nearly every other country have their embassies in Tel Aviv. Israel considers Jerusalem its capital, but Palestinians claim part of Jerusalem as the capital for a future Palestinian state.

U.S. presidents have repeatedly waived a law requiring the embassy to be moved.

Donald Trump's children may see his move to the White House as a way to raise money for pet causes.

Two recent fundraising pitches featuring the incoming first family were meant to benefit charities. But they also raised the possibility the Trumps are inappropriately selling access.

Eric Trump tried auctioning coffee with his sister, Ivanka, to raise money for a children's hospital. Eric and Donald Trump Jr. are named as part of a fundraiser that offered the chance to rub elbows with their father during Inauguration weekend.

These events are dissolving as quickly as they become public, suggesting the family is learning on the fly what's acceptable.

The Ivanka Trump coffee has been canceled. And on the Inauguration event, Hope Hicks, a Trump spokeswoman, said the sons "are not involved."

Trump is meeting with Carranza at his home in Florida on Tuesday. Carranza served as deputy administrator of the Small Business Administration under Bush.

Trump is also meeting with businessman Luis Quinonez, who runs a company with military and health care ties. Quinonez is said to be under consideration as Veterans Affairs secretary.

With just a handful of Cabinet posts to fill, Trump is facing some criticism for a lack of diversity in his senior team, which currently includes no Hispanics. The National Association of Latino Elected and Appointed Officials said Tuesday that it was "deeply concerned" at the lack of Hispanics considered for top jobs.

Carranza was a member of Trump's Hispanic advisory council during the campaign.

Senate Majority Leader Mitch McConnell is rejecting calls for a special Senate investigative committee focused on possible interference in U.S. elections by Russia and other countries.

McConnell says a finding by U.S. intelligence officials that Moscow hacked Democratic emails in a bid to elevate Donald Trump "is a serious issue, but it doesn't require a select committee."

The Republican leader says in an interview with Kentucky Educational Television that he is "very concerned" that "the Russians were messing around in our elections," but said the Senate intelligence committee is able to investigate it.

Senators including Democrat Chuck Schumer of New York and Republican John McCain of Arizona have called for a special Senate committee to investigate efforts by Russia, China and Iran to meddle in U.S. elections.

Donald Trump is taking issue with Bill Clinton's criticisms of him.

Clinton told a weekly newspaper in New York state earlier this month that Trump "doesn't know much." Clinton went on to say: "One thing he does know is how to get angry, white men to vote for him." The ex-president also claimed that the president-elect called him after his election victory over Hillary Clinton.

First of all, Trump said in a two-part tweet Tuesday, "Bill Clinton stated that I called him after the election. Wrong, he called me (with a very nice congratulations)."

Trump added that Clinton is the one who "'doesn't know much'...  especially how to get people, even with an unlimited budget, out to vote in the vital swing states (and more)." The Clinton campaign, Trump says, "focused on the wrong states."

Trump fired off those tweets the morning after he formally won the presidency in Monday's Electoral College tally.

Bill Clinton made his comments to The Record-Review, serving the towns of Bedford and Pound Ridge.

Jumping ahead of investigators, President-elect Donald Trump is blaming Islamic terrorists for deadly violence in Turkey and Germany and vowing anew to eradicate their regional and global networks.

Authorities in both countries were still investigating Monday when Trump issued a pair of statements condemning the attacks. The White House had already described the episode in central Berlin, in which a truck rammed into shoppers at a Christmas market, as an apparent terrorist attack.

Trump called the brazen shooting of Russia's ambassador to Turkey as he attended a photo exhibit "a violation of all rules of civilized order."   He says a "radical Islamic terrorist" had assassinated the diplomat, Andrei Karlov.