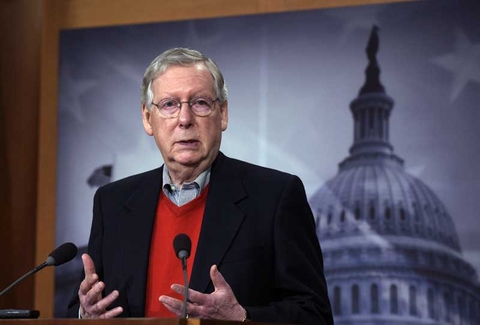 Trump is meeting with Carranza at his home in Florida on Tuesday. Carranza served as deputy administrator of the Small Business Administration under Bush.

Trump is also meeting with businessman Luis Quinonez, who runs a company with military and health care ties. Quinonez is said to be under consideration as Veterans Affairs secretary.

With just a handful of Cabinet posts to fill, Trump is facing some criticism for a lack of diversity in his senior team, which currently includes no Hispanics. The National Association of Latino Elected and Appointed Officials said Tuesday that it was "deeply concerned" at the lack of Hispanics considered for top jobs.

Carranza was a member of Trump's Hispanic advisory council during the campaign.

Senate Majority Leader Mitch McConnell is rejecting calls for a special Senate investigative committee focused on possible interference in U.S. elections by Russia and other countries.

McConnell says a finding by U.S. intelligence officials that Moscow hacked Democratic emails in a bid to elevate Donald Trump "is a serious issue, but it doesn't require a select committee."

The Republican leader says in an interview with Kentucky Educational Television that he is "very concerned" that "the Russians were messing around in our elections," but said the Senate intelligence committee is able to investigate it.

Senators including Democrat Chuck Schumer of New York and Republican John McCain of Arizona have called for a special Senate committee to investigate efforts by Russia, China and Iran to meddle in U.S. elections.

Donald Trump is taking issue with Bill Clinton's criticisms of him.

Clinton told a weekly newspaper in New York state earlier this month that Trump "doesn't know much." Clinton went on to say: "One thing he does know is how to get angry, white men to vote for him." The ex-president also claimed that the president-elect called him after his election victory over Hillary Clinton.

First of all, Trump said in a two-part tweet Tuesday, "Bill Clinton stated that I called him after the election. Wrong, he called me (with a very nice congratulations)."

Trump added that Clinton is the one who "'doesn't know much'...  especially how to get people, even with an unlimited budget, out to vote in the vital swing states (and more)." The Clinton campaign, Trump says, "focused on the wrong states."

Trump fired off those tweets the morning after he formally won the presidency in Monday's Electoral College tally.

Bill Clinton made his comments to The Record-Review, serving the towns of Bedford and Pound Ridge.

Jumping ahead of investigators, President-elect Donald Trump is blaming Islamic terrorists for deadly violence in Turkey and Germany and vowing anew to eradicate their regional and global networks.

Authorities in both countries were still investigating Monday when Trump issued a pair of statements condemning the attacks. The White House had already described the episode in central Berlin, in which a truck rammed into shoppers at a Christmas market, as an apparent terrorist attack.

Trump called the brazen shooting of Russia's ambassador to Turkey as he attended a photo exhibit "a violation of all rules of civilized order."   He says a "radical Islamic terrorist" had assassinated the diplomat, Andrei Karlov.