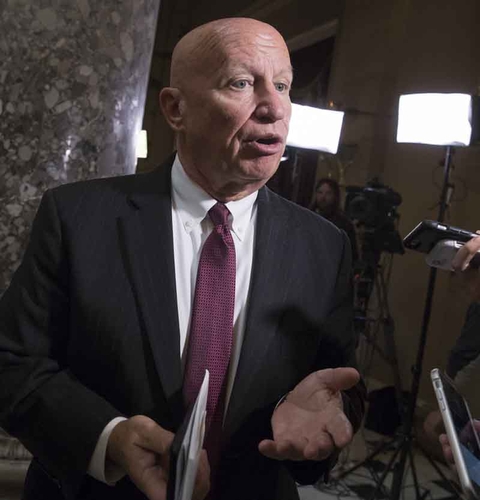 Washington — House Republicans and Democrats bickered heatedly Monday over whether the GOP tax bill truly helps the middle class, as the Ways and Means Committee kicked off a marathon session to amend and vote on the far-reaching legislation President Donald Trump hopes to sign into law by year's end.

Republicans focused on findings by Congress' nonpartisan Joint Committee on Taxation that the bill would lower taxes across all income levels over the next several years.

Democrats returned repeatedly to a section of the analysis showing taxes would actually go up beginning in 2023 for some 38 million taxpayers or families making $20,000 to $40,000 a year.

"There are a lot of people expecting a tax cut who would be big losers under this bill," proclaimed Democratic Rep. Bill Pascrell of New Jersey. "This is a joke and you've got to face up to it."

At stake is whether the GOP will succeed in passing the most sweeping rewrite of the tax code in decades, which would be a major achievement for congressional Republicans and Trump after a year largely devoid of legislative wins. And looking ahead to 2018 midterms where Democrats will aim to wrest back control of the House from the GOP, each side is trying to win the political debate over who is truly looking out for middle-class Americans.

Trump’s tax plan has been in trouble from the start. See Official estimate could upend Trump tax plan before release.

The legislation adds $1.5 trillion to the ballooning national debt, delivers a major tax cut to corporations, and repeals the estate tax, which would benefit a tiny percentage of the wealthiest families in the country. It also simplifies the loophole-ridden tax code by collapsing today's seven personal income tax brackets into four, nearly doubles the standard deduction used by people who don't itemize, and increases the child tax credit, an element championed by first daughter Ivanka Trump.

Although several analyses have found that the bulk of the legislation's benefits goes to corporations and the wealthy, Republicans argued vociferously that the legislation is targeted toward the middle class.

"It's about making America's economy stronger than ever by delivering more jobs, fairer taxes and bigger paychecks across the nation," said Ways and Means Committee Chairman Kevin Brady, R-Texas.

Brady is aiming to push the legislation through committee and to the full House later this week, and GOP leaders are aiming for House passage before Thanksgiving.

The committee's top Democrat, Richard Neal of Massachusetts, countered that the bill "puts the well-connected first while forcing millions of American families to watch while their taxes go up." He complained that Republicans crafted it in private without input from Democrats.

The tax proposal is the first major rewrite of the U.S. tax code in three decades. After embarrassing failures to make good on years of promises to repeal "Obamacare," the tax bill is enthusiastically backed by Trump, House GOP leaders and many rank-and-file Republicans, who are promising a simpler IRS code, a more globally competitive business tax structure, and tax cuts for the middle class and families with children.

But there's considerable trepidation as well. In addition to the overall increases in later years for lower-income Americans, many earners in the upper-middle class, especially those from high-tax states, are facing tax increases. That's because the measure would no longer permit taxpayers to deduct state income taxes from their federal taxes.

Powerful lobbyists are fighting to protect favored deductions, while a few well-financed interest groups, including the National Association of Homebuilders, have already vowed to oppose the legislation. The homebuilders group has voiced concerns over Republicans' decision to lower the mortgage interest deduction from $1 million to $500,000.