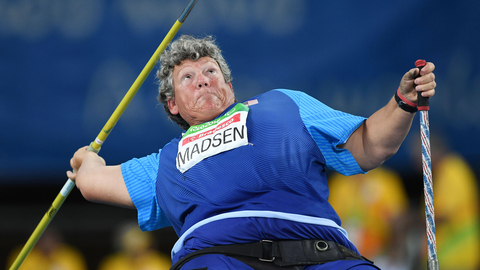 Angela Madsen was a three-time Paralympian. Photo by Atsushi Tomura/Getty Images via CNN.

Madsen, 60, was declared dead at 11 p.m. PST on Monday, June 22, when the US Coast Guard discovered her body several hours after she last made contact with anybody, according to a letter posted to RowOfLife.org, a website set up to document the journey, and signed by Madsen's wife, Debra Madsen, and filmmaker Soraya Simi.

A paraplegic, Angela Madsen was a six-time Guinness World Record holder who was in the midst of attempting her next feat: to become the first paraplegic and oldest woman to row from California to Hawaii alone.

"She told us time and again that if she died trying, that is how she wanted to go," Madsen and Simi wrote in their letter.

The two wrote that rowing an ocean solo was Madsen's biggest goal and that she was willing to take that risk because "being at sea made her happier than anything else."

"Angela was a warrior, as fierce as they come," they wrote. "A life forged by unbelievable hardship, she overcame it all and championed the exact path she envisioned for herself since she was a little girl."

Madsen's journey was the subject of a documentary film, and she frequently checked in with her wife Debra and the filmmakers via satellite.

Madsen carried all of her food and used a desalinator to make fresh water. She set a goal of rowing 12 out of every 24 hours for three-four months to complete her journey, the filmmakers wrote on the film's website.

She departed from Los Angeles and rowed approximately 1,114 nautical miles, which was 1,275 nautical miles from her destination in Honolulu. Madsen had been alone at sea for 60 days.

On Sunday, June 21, Madsen checked in via satellite and said that she was going into the water to fix her bow anchor. After not hearing from Madsen for several hours, a search and rescue operation was initiated. An aircraft was dispatched and a cargo vessel was re-routed to find her. The Coast Guard discovered her body, the letter said.

"A life forged by unbelievable hardship"

Madsen served as a Marine in her 20s when she sustained a back injury and had to undergo corrective back surgery. However, errors in the surgery left her a paraplegic.

But Madsen said she would not let her disability hold her back as she took up adaptive sports. She first rowed for the US National Team in 2002 when para-rowing made its debut at the World Rowing Championships in Seville, Spain, according to USRowing.

While with the US National Team, Madsen won four gold medals and one silver medal at the world championships during her career. She would go to the Paralympics three times where she won bronze in both rowing and shot put, the filmmakers said.

"I do know that whatever my purpose is in this life, my differently-abled, physically-challenged, broken-down, beaten-up body seems to be the vehicle required for me to achieve it. ... I am purpose-driven; I may suffer pain and not walk upright in this life, but when I go home, I will not suffer the walk through the gate. I can live with that. If I could go back and change things, I would not. It would be nice not to have to suffer so much pain but, hey, that's just the way it is. ... In the beginning, I was angry. But now, I completely understand," Madsen wrote in her memoir "Rowing Against the Wind."

Madsen was an LGBTQ activist, having served as the grand marshal of the Long Beach Pride Parade in 2015. She was also a champion of disability rights.