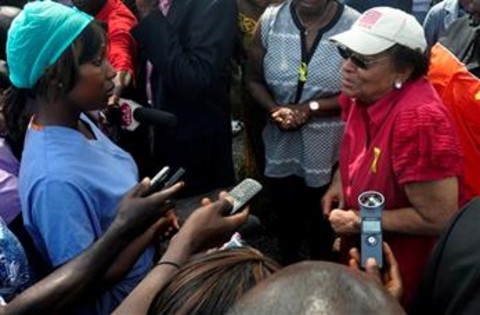 Liberian President Ellen Johnson Sirleaf, right, speaks to a nurse as they celebrate being an Ebola-free nation, in Monrovia, Liberia, Saturday, May 9, 2015. (AP Photo/ Abbas Dulleh)

While celebrating the milestone, President Ellen Johnson Sirleaf told The Associated Press the damage wrought by the worst Ebola outbreak in history is "a scar on the conscience of the world."

For some survivors, she said, "the pain and grief will take a generation to heal."

Meanwhile, new cases were reported this week in neighboring Sierra Leone and in Guinea, the other two countries hit hardest by Ebola. Officials said they are cautious about openly celebrating the end of Ebola in Liberia, as the continued presence of the disease in the region means just one sick patient slipping over the border into Liberia could spark a resurgence of cases.

A White House statement congratulated Liberia but urged vigilance to keep Ebola from coming back. "We must not let down our guard until the entire region reaches and stays at zero Ebola cases," the statement said.

She lamented the damage done to her country, which was only about a decade removed from a devastating civil conflict when the outbreak struck.

"Young Liberians who only months before strode confidently to school with dreams of a future as an engineer, a teacher or a doctor — all of which Liberia desperately needs — had their lives mercilessly cut short," she told AP earlier at her Monrovia home.

The international response to Ebola has been roundly criticized as too slow and ineffective. While praising the international partners for helping to get Liberia to zero cases, Sirleaf said the fight "got off to slow start."

"Therefore, let today's announcement be a call to arms that we will build a better world for those Ebola could not reach," she said. "It is the least the memories of our dearly departed deserve."