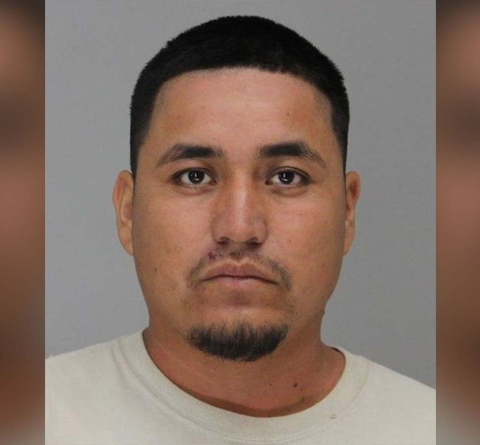 Police said a man in Dallas admitted that he followed a transgender woman to a bus stop before shooting her multiple times.

Domingo Ramirez-Cavente, 29, has been charged with aggravated assault in connection with the attack last Friday, the Dallas Police Department said in a statement. The attack has been treated by authorities as a hate crime.

A transgender woman had surgery last week after she was shot multiple times at a bus stop. Police said a Latino man driving a late-model four-door Chevrolet pickup pulled alongside the victim and shouted transphobic slurs.

The victim walked away and went to a bus stop but the suspect saw her waiting alone and approached her, an arrest affidavit states.

The suspect opened fire, striking her multiple times in the chest and arm, officials said.

Police said Ramirez-Cavente was arrested Tuesday after detectives located a vehicle that matched the suspect's vehicle, the affidavit said.

Ramirez-Cavente was initially arrested on traffic charges and taken for questioning to the police headquarters, where he spoke to the detectives after waving his Miranda rights, police said.

"During the interview, the suspect admitted to the details of the offense, including shooting the victim at the bus stop," an arrest affidavit said.

A spokesman for the Dallas County Sheriff's Department said Ramirez-Cavente was in custody Wednesday and has not yet retained counsel. His bail will be set by a magistrate.

The condition of the woman was not clear Wednesday.

Last week's attack is the latest in a string of attacks on Dallas' transgender community in recent years.

Authorities have made arrests in some of the recent assaults, but others remain under investigation. Among those attacked are:

• Chynal Lindsey, 26, of Arlington, whose body was found in White Rock Lake in June;

• Muhlaysia Booker, 22, who was found shot to death May 18 in south Dallas (separately, several men were caught on video the month before, punching and kicking Booker in an apartment complex parking lot);

• Brittany White, who was found fatally shot in her car October 21;

• Carla Flores-Pavon, 26, who was found strangled to death in her Dallas apartment three days before Hall's body was found;

• An unidentified woman whose body was found in a field in July 2017;

Police in June arrested a 33-year-old Dallas man in Booker's killing, charging him with murder in her death, along with two other killings. Later that month, authorities arrested a 22-year-old man in Lindsey's death. He, too, was charged with murder.

Though Dallas police have said they're treating Friday's case as a hate crime, Texas is one of 13 states with hate crime laws that cover sexual orientation but not gender identity, according to the non-profit think tank Movement Advancement Project.

State Rep. Garnet Coleman has been trying to add transgender protections to the state's hate crime law for more than a decade. Though Coleman's most recent attempt, introduced a week after the nonfatal attack on Booker, failed to make it out of committee, the bill's co-sponsor said it still amounted to a victory.

"While it may seem like a small, procedural step, hearing Rep. Coleman's bill was a meaningful leap forward in the struggle for transgender rights, recognition and equality in Texas. Because of Rep. Coleman's leadership, a committee heard testimony directly from trans Texans, including stories about fearing for their safety every day," said state Rep. Jessica Gonzalez, vice chairwoman of the state House's LGBTQ caucus.

Following the death of Ja'leyah-Jamar in Kansas City, Kansas, on September 13, the Human Rights Campaign reported that she was 19th transgender victim to die violently in the United States this year. There were 26 such deaths in 2018, the HRC said. The majority of victims are black women, the organization said.