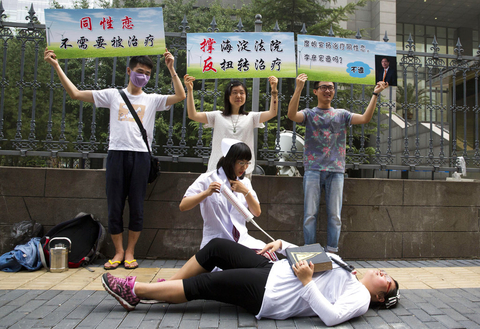 BEIJING (AP) — A gay man in central China has successfully sued a mental hospital over forced conversion therapy, in what activists are hailing as the first such victory in a country where the LGBT rights movement is gradually emerging from the fringes.

A court in Zhumadian in Henan province ordered a city mental hospital to publish a public apology in local newspapers and pay the 38-year-old man 5,000 yuan ($735) in compensation, according to a copy of the June 26 judgment seen by The Associated Press.

The man, surnamed Yu, had been forcibly admitted to the institution in 2015 by his wife and relatives and diagnosed with "sexual preference disorder," court documents show. He was forced to take medicine and receive injections before finally walking free after 19 days.

In its relatively narrow ruling, the court did not weigh in on the practice of gay conversion therapy or account for Yu's sexual orientation. The court said forcing Yu into a mental institution if he did not pose a danger to himself or others amounted to "infringing on the plaintiff's right to individual freedom."

When reached by phone on Tuesday, Yu's lawyer expressed satisfaction with the outcome but declined to discuss the case, saying his firm asked him not to speak to media. Yu declined to comment.

China removed homosexuality from its list of recognized mental illnesses more than 15 years ago, but stories are rife of families admitting their relatives for conversion therapy.

Gay rights activists say the case marks the first victory against a public mental institution for compulsory therapy against a patient's will. In 2014, a Beijing man named Peng Yanhui checked himself into a private conversion clinic to investigate its advertised electroshock treatments. Peng, a gay rights activist who goes by Yanzi, then sued the clinic and won a $500 decision from a Beijing court for the suffering he endured in treatment.

The recent ruling in Zhumadian "confirmed the illegality of forced treatments," Peng told the AP. "It's time for China to enact laws to prohibit forced gay conversion therapy."

The Zhumadian mental hospital did not immediately provide comment when reached by phone.

While few Chinese have religious objections to homosexuality and homophobic violence is rare, the country's authoritarian politics and conservative society's preference for marriage and childbearing create subtle barriers that keep most gays in the closet.

Vibrant gay scenes do exist in a few large cities including Shanghai, which has an annual gay pride parade, and depictions of same-sex relationships are increasingly seen in Chinese films and television. China's internet censors have also tolerated increasingly open debate about LGBT issues.

Hours later, a provincial branch of the Communist Youth League, an influential organization of the ruling political party, appeared to join the debate, declaring on China's Twitter-like Weibo microblog that "homosexuality is not a mental disorder," and urging its followers to "put down your prejudice and hostility, you can do it!"

The unexpected post from a party organization was soon reposted tens of thousands of times and attracted an outpouring of support as well as criticism.