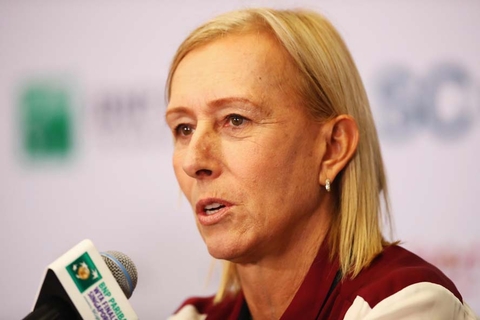 In a lengthy blog post Sunday, former tennis star Navratilova said she had "stumbled into a hornets nest" and been labeled as transphobic after speaking about the subject in recent months.

While she said she was sorry for "suggesting that transgender athletes in general are cheats" she also added that there was no "perfect solution" to this issue and that if "everyone were included, women's sports as we know them would cease to exist."

Navratilova wrote: "I know I don't have all the answers. I don't think there is a definitive answer here. That is why I want a debate, a conversation that includes everyone and is based, as I have said, not on feeling or emotion but science, objectivity and the best interests of women's sport as a whole.

"Needless to say, I have always and will always be a champion of democracy, equal rights, human rights and full protection under the law for everyone. When I talk about sports and rules that must be fair, I am not trying to exclude trans people from living a full, healthy life.

"And I am certainly not advocating violence against trans people, as has been suggested. All I am trying to do is to make sure girls and women who were born female are competing on as level a playing field as possible within their sport."

The 18-time Grand Slam champion wrote in The Sunday Times last month that it was "insane" and "cheating" that "hundreds of athletes who have changed gender by declaration and limited hormone treatment have already achieved honors as women that were beyond their capabilities as men."

Those comments were labeled "transphobic" by trans rights group Trans Actual, which tweeted at the time: "If trans women had an advantage in sport, why aren't trans women winning gold medals left, right & center?"

According to current rules issued by the International Olympic Committee in 2016, trans men are allowed to compete without restriction.

Trans women, however, must show that their testosterone level has been below a certain level for at least 12 months before their first competition.

Navratilova has long spoken out for gay athletes and suffered abuse when she came out while she was still playing professional tennis.

Her comments on transgender athletes saw Athlete Ally, a US-based organization that speaks up for LGBT athletes, cut its links with the tennis star.

However, former swimmer Davies told the BBC Saturday that trans athletes should not be allowed to compete in female competitions to "protect women's sport."

"It is not a transphobic thing - I really want to say we have no issue with people who are transgender," Davies said.

"Every single woman athlete I've spoken to, and I have spoken to many, all of my friends in international sports, understand and feel the same way as me," she added.

"We need to come up with something that works for everybody and everybody agrees with, rather than having all sorts of diverse rules.

"We need to come up with a unified set of rules that is clear, concise and fair."

Davies' comments followed a Tweet posted Friday where she stated she believes "there is a fundamental difference between the binary sex you are born with and the gender you may identify as."

Rachel McKinnon, the first transgender woman to win a world track cycling title responded by stating Davies was a "transphobe."

"There is no debate to be had over whether trans women athletes have an unfair advantage: it's clear that they don't," she wrote in a Tweet.

"Since the Nov 2003 IOC policy openly allowing trans women to compete, not a single trans athlete has even qualified for the Olympics, let alone won a medal.

"This remains true even after the Nov 2015 IOC policy making it easier for trans women to compete. No trans woman has won an elite world championship medal. The fear that trans women will suddenly 'take over' sport is irrational, which is the very definition of transphobia," McKinnon added.