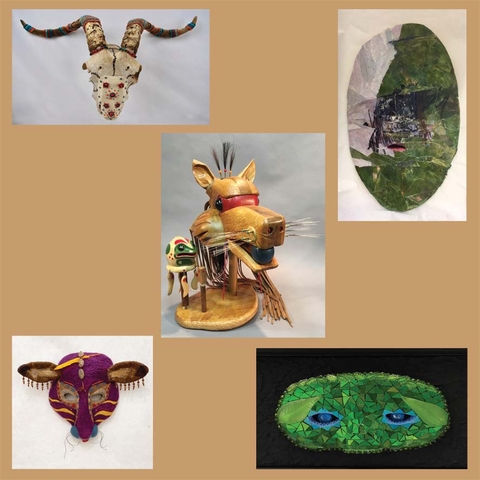 Art to be displayed in August at Oklahomans for Equality. Photos provided.

August brings many curators of art to Oklahomans for Equality (OkEq) showcase and exhibit of local artists to the Dennis R. Neill Equality Center in Tulsa. The Masks: 14 Visions exhibit will begin with a reception on Thursday, August 1, from 6-9 p.m. The work will be displayed throughout the month.

The show promises “funky to elaborate,” says Rusty Johnson, co-curator with Sharyl Landis. “Those artists enjoyed having a broad theme and creating towards it.”

Many of the Masks: 14 Visions artists first came together in a show titled Trees at the Tulsa Performing Arts Center in 2018.

“And we had many comments from viewers who enjoyed the variety of media and interpretation,” Johnson added. “Likewise, we felt the Equality Center would be equally open to the variety this show represents.”

He describes the masks in the August show range in spirit from tribal to modern, fantasy to skeletal, dreamy to eerie, arboreal to playful.

The show features 22 pieces by Tulsa artists working in a variety of two- and three-dimensional media, including paints, ceramics, mosaic, fabric, wood and assemblage.

Masks: 14 Visions will begin with a reception on Thursday, August 1, from 6-9 p.m. at the Dennis R. Neill Equality Center, located at 621 E. 4th Street in Downtown Tulsa. There will be a door prize at the reception with the winner receiving a piece of work from the artist. The show continues throughout August.