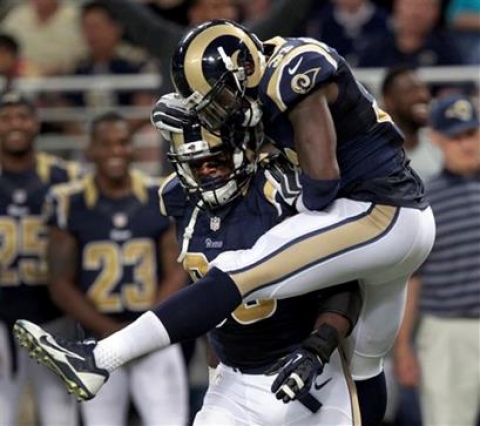 St. Louis (AP) — Michael Sam waited a while longer to get back on the field in his second preseason game.

When he did, he made a bigger impact in a bid to bolster his case for a spot on the St. Louis Rams' roster.

Sam, the NFL's first openly gay player drafted in the NFL, raced around tackle Derek Sherrod to flatten Green Bay quarterback Matt Flynn in the fourth quarter of the Rams' 21-7 loss to the Packers on Saturday for his first sack.

For Sam, the Southeastern Conference defensive player of the year with 11½ sacks for Missouri, it seemed like a long time coming.

"Finally. I finally got that under my belt, so it feels good," Sam said.

The marquee attraction heading into the game for St. Louis was the return of another Sam — quarterback Sam Bradford, who was sidelined for much of last season after knee surgery.

Bradford played the first two series, throwing an 11-yard touchdown pass to Lance Kendricks and popping right back up after taking the first hit of his return from behind by Julius Peppers.

"I knew I was going to take a hit or two today," said Bradford, who threw for 101 yards on 9 of 12 passing. "That's just part of the game. But it's always nice to get that first one under your belt, knowing that everything's going to be OK."

Counterpart Aaron Rodgers, also making his preseason debut, was 11 for 13 for 128 yards and a 3-yard score to Randall Cobb. He also had another TD pass called back by a penalty and the Packers, who never trailed, settled for a Mason Crosby field goal instead.

Bradford was long gone before Sam finally got in the game. After entering with about 5 minutes left in his preseason debut and playing about half the game, he didn't get in until the second half against the Packers.

Instead of playing purely at left defensive end, Sam also saw time on the right end of the line.

After his first sack, coming on third down and resulting in a 10-yard loss, Sam got up and celebrated — much as he did after all his sacks at Missouri.

Now, he's fighting for a job on a stacked defensive line. And coach Jeff Fisher says his best way of earning a roster spot is showing what he can do at defensive end, not through versatility on special teams.

"When you make big plays, you easily can make the team," Sam said.

Sam nearly got a second sack on the next drive, but instead got some playful ribbing from linebacker Phillip Steward, who got there first.

"I thought Michael was really going to make it, but he missed and my eyes just got big and I made it," Steward said, adding that he thanked Sam for setting him up.

"I got the first game under my belt. I felt more comfortable, more relaxed," Sam said. "I know the speed of the game, I know how it is and it just felt right."

Sam, a seventh-round pick, is likely competing with undrafted Ethan Westbrooks for a backup spot. Westbrooks was the second-team left defensive end behind Chris Long and had a sack with four total tackles.

"I did OK today. There was some good stuff clearly and there was some stuff I need to work on," Sam said. "I just want to get better every week so I can compete to make this team."

Notes: Rams backup RB Isaiah Pead's left knee buckled at the end of a 33-yard kickoff return in the first quarter. He was helped off the field and then carted away for tests. Fisher said it's likely he tore his ACL and will be out for the season. ... Rams OL Greg Robinson, the second overall pick, started at left tackle and also got work at guard as in the preseason opener.