A newlywed story: Ty and April 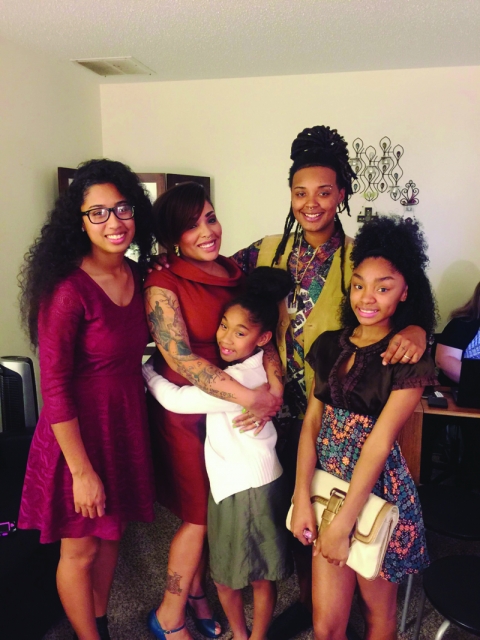 April at center with Ty (to her left) and their daughters. Photo provided.

To my pleasure, I am hearing more and more black people speak openly about their LGBT love life. At work, I noticed Ty, a confident young woman, as she mentioned her wife in our training class. Instantly, my ears perked up and I took interest. I knew that I would be speaking to her later about her love, but waited until I got to know her a little longer.

Ty is one of two 20-something black open lesbians in my new training class. The company we work for supports the LGBT community and has participated in several OKC Prides. The welcoming atmosphere allows the LGBT employees freedom from fear of being fired for their orientation.

What interested me most was how unashamed she was about stating that she had a wife and I thought to myself, “We are making progress in the black community with confidence amongst our LGBT brothers and sisters.”

Ty mentioned that she had just gotten married in November of 2015. Newlyweds have a special kind of gleam in their eye and Ty definitely had that sparkle. When the time was right I asked Ty if I could interview her and her wife about their life together. She immediately said, “Sure.”

Her wife’s name is April. Their story shows me that black LGBT couples, especially in Oklahoma, can live freely without shame.

They started off being best friends and years later it turned into a romance. Ty stated that her family “has always been supportive” of her lifestyle and relationship with April. She has never had to hide anything. April expressed the same response, noting, even the [family members] I assumed wouldn’t be supportive.

The couple has three daughters ages 9, 13, and 17 (biologically born to April) who April was the most concerned about being accepting of the relationship, but they too have had no negative issues. Ty aspires to carry a child for them in the near future.

April’s assessment was very similar. She stated, “Looking at the progression that I have seen over the years, we have come so far.” Indeed, we have come very far and still continue to open hearts and minds.

I was interested in knowing what they say to people who speak negatively about their sexual orientation. Both Ty and April said that those people have no relevance when it comes to their personal preference because it is not their lives to live and they are entitled to acknowledgement.

Lastly, I asked the newlyweds, “What is the greatest part about being married?” April’s response was, “I married my best friend and now I get to spend the rest of my life with her.”

Ty remarked, “Our relationship is five years strong. She is my best friend and my corner I turn to for everything.” I wish many years of love to this strong couple.