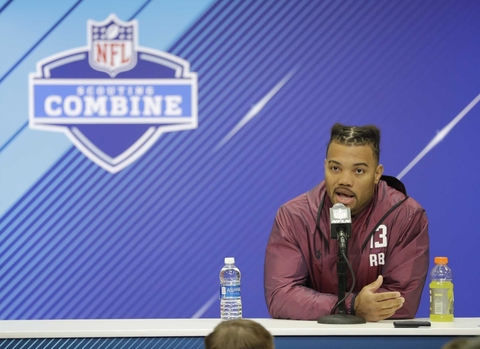 The NFL is investigating whether questions asked to LSU running back Derrius Guice at the combine were inappropriate.

Guice, projected as one of the top running backs in this draft, told Sirius XM Radio that one team asked if he was gay and another club asked if his mother "sells herself."

While not confirming that it had evidence yet that such questions were asked of Guice, the league released a statement Thursday deploring any such queries.

"A question such as that is completely inappropriate and wholly contrary to league workplace policies," the NFL statement said.

"The NFL and its clubs are committed to providing equal employment opportunities to all employees in a manner that is consistent with our commitment to diversity and inclusion, state and federal laws and the CBA. We are looking into the matter.

"The league annually reminds clubs of these workplace policies that prohibit personnel from seeking information concerning a player's sexual orientation."

Before each combine, where all 32 teams interview prospects, the league sends guidance to the clubs about specific language to be avoided in questioning. Among the regulations is a ban on such questions as whether the player likes men or women; is gay or straight; has any children or dependents and who has primary caretaking responsibilities; and whether or not he married his child's mother.

Two years ago, a Falcons assistant coach asked an inappropriate question to Ohio State's Eli Apple, who eventually was drafted by the Giants. Falcons coach Dan Quinn apologized for the assistant's question.