Pence to meet Trump amid talk about vice presidential choice 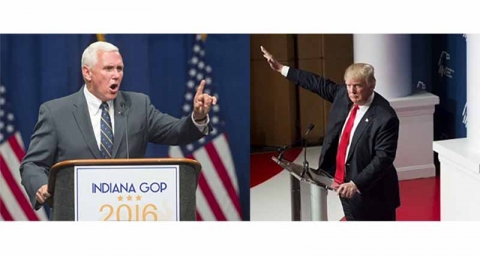 INDIANAPOLIS (AP) — Indiana Gov. Mike Pence will meet with presumed Republican presidential nominee Donald Trump over the weekend, a top aide to the governor said Friday, after it was confirmed that Pence is under consideration as a vice presidential running-mate.

While the Republican governor's embrace of social issues has brought considerable criticism from Democrats and business leaders, he is well regarded among national conservatives and would bring with him the support of the party's evangelical wing. The former congressman also would bring a familiarity with Washington that Trump says he needs, and Pence also has been praised by Republicans for presiding over an improving economy during his time as governor.

Back home in Indiana the possible move raised questions about the governor's race, which is a rematch between Pence and his 2012 opponent, former Democratic state House Speaker John Gregg. If Pence were to become Trump's vice presidential nominee, state law dictates that he could not run for both offices.

Pence campaign spokesman Marc Lotter characterized the meeting with Trump as nothing out of the ordinary though he declined to comment on the exact purpose, or if Pence was being considered as a potential vice presidential pick.

"Gov. Pence has accepted an invitation to spend a little time with Mr. Trump this weekend," Lotter said. "That is consistent with meetings that Mr. Trump is scheduling with many key party leaders."

Pence downplayed the possibility he would be the vice presidential choice Thursday, telling reporters: "My focus is here in the Hoosier state and that is where it will stay." But he also did not rule out the possibility, saying he "wouldn't speak to a hypothetical."

In addition to Pence, the New York billionaire is considering former House Speaker Newt Gingrich, New Jersey Gov. Chris Christie and U.S. Sen. Jeff Sessions of Alabama among what he previously described as a short list of possible running mates. The names were confirmed by people with direct knowledge of the vetting process who spoke on the condition of anonymity because they were not authorized to discuss the situation publicly.

Pence served in Congress for 12 years before he was elected Indiana's governor in a narrow 2012 victory over Gregg. He once had his own presidential ambitions but his popularity has since fallen and he ruled out a run last year.

Under Pence, who has described himself as "a Christian, a conservative and a Republican, in that order," Indiana has marched to the front lines of the nation's culture wars. In 2015 he drew mostly negative attention to the state after signing a law that critics say would have allowed businesses to deny service to gay people for religious reasons. Groups threatened boycotts, late-night television shows mocked the policy and a coalition of gay rights supporters and business interests successfully demanded that lawmakers approve changes.

He has also clashed with the local Catholic archdiocese by opposing the settlement of Syrian refugees in Indianapolis. And he recently signed a law banning abortions in cases where a fetus could have a potentially life-threatening condition, though the law will not go into effect pending the outcome of a court challenge.

The speculation that Pence could be a vice presidential pick drew a mixed response in Indiana.

Gregg's campaign seized on the news and said the possible move was an example of Pence being "more focused on establishing his conservative credentials and building a national profile than on improving the lives of everyday Hoosiers."

"Mike Pence has always put his own political agenda ahead of everything and everyone else," Gregg campaign spokesman Jeff Harris said. "For him running for governor was never about serving Hoosiers, it has always been about using the office to get into even higher office."

But Curt Smith, an influential Indiana evangelical figure, said Pence would be an excellent choice for Trump, who is viewed skeptically by evangelicals and movement conservatives. And he said the honor of being considered as Trump's pick was an endorsement of Pence's success as a governor.

"He would be extremely reassuring to conservatives in general and evangelicals in particular," Smith said. "He had a leadership role in Congress and would be able to be the president's lead on Capitol Hill."

Still, some Republicans worried that even speculation about Pence becoming Trump's running mate could negatively impact Republican's chances of winning in November.

Devin Anderson, a longtime Indiana Republican said its' important for Pence to stay because he has done a good job presiding over an improving economy and plummeting unemployment rate, which Republicans credit to the state's low taxes and limits on regulation.

"It seems to me that the governor should continue to press his case to Hoosier voters in this governor's race, which is still a tight race," said Anderson, a businessman and former staffer to GOP members of the state's congressional delegation. "It's critical that Mike Pence remains governor and keep Indiana on a good path."

AP writers Steve Peoples and Jill Colvin in Washington contributed to this story.
BRIAN SLODYSKO, Associated Press. Copyright 2016 The Associated Press. All rights reserved. This material may not be published, broadcast, rewritten or redistributed.
The Gayly - 7/1/2016 @ 3:29 p.m. CDT