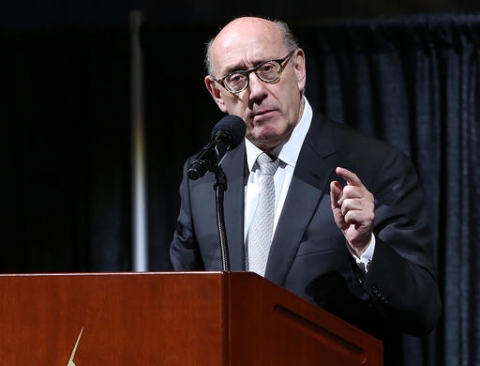 ORLANDO, Fla. (AP) — The administrator of a $23 million fund of donations for survivors and family members of the shooting at a gay nightclub in Orlando that left 49 patrons dead warned Thursday that squabbling over estate questions could be the biggest obstacle to distributing the money.

Ken Feinberg told about 200 family members and survivors at the first of two town hall meetings that family members, domestic partners and spouses of patrons who died need to agree on who will represent a victim's estate, and he encouraged them to use probate court in Orlando to make that designation. Feinberg, who has represented similar funds for victims of the Sept. 11 attacks and the Boston marathon bombing, acknowledged that such a decision may be complicated by same-sex domestic partners having competing interests with family members of victims. The June 12 massacre was the deadliest mass shooting in modern U.S. history.

"We aren't going to get into family arguments about the distribution of money. Work it out," Feinberg said. "We can't get in the middle of this."

The exact amount each family will get is to be determined by how much is raised by the end of September.

Under a proposal yet to be finalized, there will be four classes for distributing the funds: families of deceased victims; people hospitalized for more than one night; people injured but not needing overnight hospitalization; and patrons who were in the club when the shooting started but were not hurt. Those hospitalized more than one night will be categorized based on the number of nights they spent at a hospital.

Those who received medical treatment must attach a letter from the hospital stating how long they were hospitalized. Victims who received outpatient treatment will be eligible only if they got treatment within 24 hours of the shooting. Those who escaped unhurt will have their claim verified through law enforcement records, Feinberg said.

Joe Saunders, a representative from the Human Rights Campaign, a gay rights group, told Feinberg he worried some patrons who escaped may not have talked to law enforcement. But Feinberg told him there has to be some way to verify a claim because, otherwise, "we'd get 5,000 names." Orlando Police have said as many as 320 patrons were in the club when the massacre began.

"There has to be some requirement to limit the number of people eligible," Feinberg said.

Ivory Mcneal, who was trapped inside Pulse for a half hour, hiding behind a palm tree on the patio, agreed law enforcement verification was the best way to determine who is eligible.

"Like all these people who are like, 'Oh, the police didn't get my information.' I was there that night. They pretty much kept us all together and we could not leave," Mcneal said. "I don't know what all these people are saying they didn't speak to the police."

All of the money will go to survivors and family members of those who died since the administrators are donating their time, Feinberg said. Applicants have until Sept. 12 to submit a claim, and payments will start two weeks later.

By Mike Schneider, Associated Press
Copyright 2016 The Associated Press. All rights reserved.
This material may not be published, broadcast, rewritten or redistributed.
The Gayly - 8/4/2016 @ 4:34 p.m. CDT