Study: Bullying persists in school, reports of sex crime up 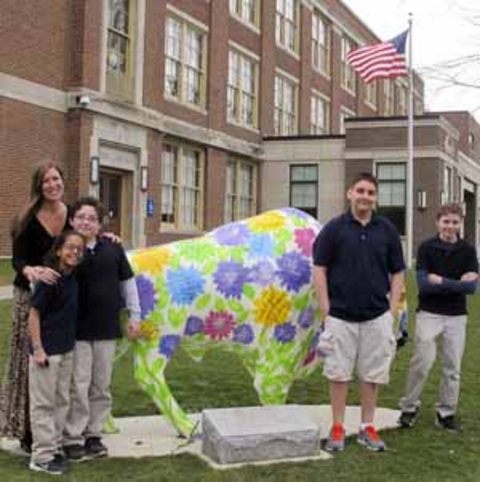 Students and teach stand with a statue of a Buffalo that's been emblazoned with anti-bullying messages outside Lorraine Academy, Public School No. 72, in Buffalo, N.Y. AP Photo, Carolyn Thompson, File.

Washington (AP) — One in every 5 middle and high school students has complained of being bullied at school and the number of reports of sexual assault on college campuses has more than tripled over the past decade, according to a federal study released Tuesday.

"There are areas of concern in terms of bullying and rates of victimization being high," said Lauren Musu-Gillette, one of the authors of the report by the National Center for Education Statistics and the Justice Department.  "We are seeing a long term decline, but we still want people to be paying attention to areas where rates are still high."

Even though the overall prevalence of bullying has been declining in American schools over the past decade, 21 percent of students aged 12-18 reported being bullied in 2015, the report found. That was slightly below the international average. 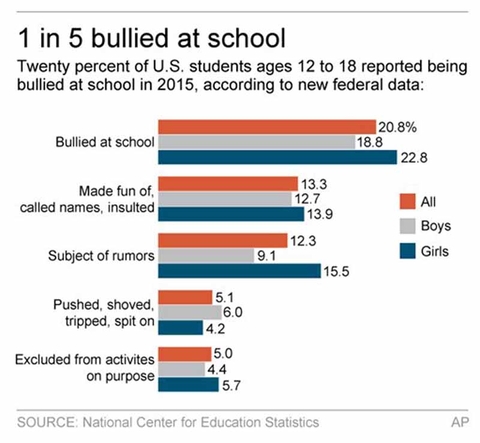 "Bullying is a public health issue because it really affects the mental wellness and health of students and as we know at the extreme end it can lead to everything from suicide to reactive violence," said David Osher, vice president at the American Institutes for Research.  "Because it happens, it doesn't mean it has to happen."

"It's a high number and a disproportionate number in comparison. We still have a lot of homophobic bias and it plays itself in schools," said Charol Shakeshaft, an education professor at Virginia Commonwealth University. "Those students are singled out and isolated and harassed."

Shakeshaft lamented the Trump's administration decision earlier this year to rescind Obama-era guidance on the use of bathrooms and other facilities for LGBT students, which she said helped them feel safer. When rescinding the guidance the Education and the Justice departments said such decisions should be left to the states.

Osher said campaigns to raise awareness can only help so much in helping to fight bullying. He called for programs that build empathy and self-awareness, identity and provide support for students who have mental health problems and foster a positive climate in schools.

"If you directly focus on bullying without addressing overall issues regarding school climate, social and emotional development of students, you are likely .... to hit a ceiling," Osher said.

The report also found a significant rise in reports of sexual assault on university campuses. Such instances jumped from 2,200 in 2001 to 6,700 in 2014. Musu-Gillette cautioned however, that it is not clear from the research whether the number of actual sex crimes has increased or whether victims now feel safer reporting them to authorities.

Other statistics are more encouraging.  The number of school deaths dropped from 53 in the 2013 school year to 48 in 2014. Non-fatal incidents of violence and theft at schools are also occurring less frequently. There were 841,000 such occurrences in 2014, compared to 850,100 the previous year.

Alcohol consumption has also gone down. In 1993, 48 percent of students reported recent alcohol use, compared to 33 percent in 2015.

Black students were being disciplined more frequently than other students across the board. In 2012, 15 percent of African-American students received out-of-school suspensions, compared to 6 percent of all students.

"There is much work left to be done," said Peggy Carr, acting commissioner of the NCES. "The data show that many students do not feel safe at school and are victimized physically, verbally and emotionally."