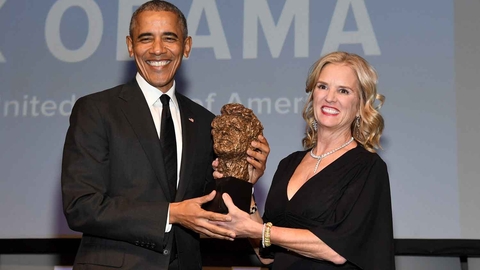 "As Bobby Kennedy taught us, the thing about hope is that it travels through space *and* time, first splashing against the rocks, but eventually breaking down the walls of cruelty and injustice," Obama wrote on Twitter Wednesday night. "And if we do our best with the time we're given, others will take hope in our example."

Kerry Kennedy, the organization's president and daughter of Robert Kennedy, presented the 44th president with the award for those who have "demonstrated a commitment to social change."

"Bobby Kennedy was one of my heroes," Obama said in a statement back in August when it was first announced he'd be receiving the award. "He was someone who showed us the power of acting on our ideals, the idea that any of us can be one of the 'million different centers of energy and daring' that ultimately combine to change the world for the better."

This year marks the 50th anniversary of the organization RFK Human Rights' founding and Kennedy's historic campaign for the White House.