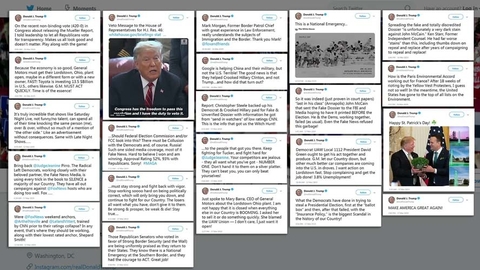 But, it's not just the sheer quantity of Trump tweets and retweets that are so mind-boggling. It's what he said in them. Here's a brief summary:

The Federal Communications Commission or Federal Election Commission should investigate whether "Saturday Night Live" and late-night talk shows are in collusion with Democrats and/or Russia because they attack him so consistently.

Attacked late Sen. John McCain, R-Arizona, for allegedly sending the FBI the Steele dossier before the election -- and working with Democrats to do so. (Also, Trump called McCain -- who, it's worth noting, is dead -- "last in his class" at the US Naval Academy.)

Urged Fox News Channel to reinstate host Jeanine Pirro after she was suspended for questioning the patriotism of Democratic Rep. Ilhan Omar of Minnesota, who is Muslim.

Urged FNC to stand up for host Tucker Carlson, who has seen some advertisers pull out of his show following the release of a series of caustic and offensive remarks he made on a radio show between 2006 and 2011.

Accused General Motors of having "let our country down" in the wake of the news that the company was relocating four American factories.

Attacked FNC anchor Shep Smith and two other weekend anchors at Fox, alleging they had "been trained by CNN prior to their ratings collapse."

Alleged that Democrats tried to "steal a presidential election," calling it "the biggest scandal in the history of our country."

Retweeted Jack Posobiec, who among other things, is a leading promoter of the Pizzagate and Seth Rich conspiracy theories.

Now. Trump has had lots of oh-my-God-did-you-see-what-he-just-tweeted days. I still remember when he took to Twitter, with no proof, that President Barack Obama had ordered Trump Tower wiretapped during the 2016 election. Or when Trump said that MSNBC host Mika Brzezinski was bleeding badly after a face lift.

But, for the most part, these were one-offs -- a single nutty tweet amid Trump's usual daily mix of propaganda and mistruth. Never before -- or at least not as far back as I can remember -- have we seen such a sustained day of wildness and wackiness from Trump.

Which is saying something. Because Trump has long turned to Twitter as his preferred method of communicating -- with his supporters, with the media and with the country. And Twitter -- I've long argued -- is where the truest form of Trump comes out. It's his Twitter feed -- not official White House statements or signing ceremonies -- where we find out what is on Trump's mind and what he really thinks about his presidency and the world.

When you think of it that way, what we witnessed on Sunday is somewhere between concerning and absolutely terrifying. The most powerful man in the country -- and maybe the world -- spent his day touting unproven conspiracy theories about stolen elections, suggesting collusion between Democrats and comedians, attacking a military hero and Republican senator, and trying to program his favorite cable network's broadcasts. And he did all of this while failing to send even a single tweet about the tragic mass shooting in New Zealand.

George Conway, the husband of White House senior counselor Kellyanne Conway, tweeted an image to the diagnosis for "Narcissistic Personality Disorder" and said bluntly of Trump: "His condition is getting worse." Brian Klass, a political scientist at UCL, was slightly more expansive: "We have a seriously dangerous normalcy bias, where we move on because we desperately want to pretend it's okay. Trump's Twitter meltdown today—which shows a deranged and unhinged person—will just be forgotten by Monday afternoon. But the deranged man will still control the nukes."

Trump's critics questioning his decision-making -- or mental heath -- isn't all that new. What was new, however, was that the White House felt the need to mobilize some of its most senior officials to push back on the idea that Trump was slipping mentally.

"No, I don't share those concerns," Kellyanne Conway told reporters Monday of her husband's worries about Trump's mental health. Conway's assertion came less than 24 hours after acting White House chief of staff Mick Mulvaney was forced to insist that "the President is not a white supremacist." Mulvaney also said, "I don't think anybody can say the President is anti-Muslim."

When, in the space of 24 hours, two of the top officials in the White House are going public to claim that the President isn't a) crazy b) a white supremacist or c) anti-Muslim, you know Trump is going through a very rough patch.

And, as with many of Trump's problems, this latest series is self-created. His willingness to take to Twitter to air grievances, promote conspiracy theories and, well, just riff rightly raises questions in the mind of any thinking person about how he thinks, what he cares about and how all of that impacts his leadership of the country.

If Trump's Sunday on Twitter doesn't raise some concerns for you, you aren't paying close enough attention.