Anatomy of a Pride parade 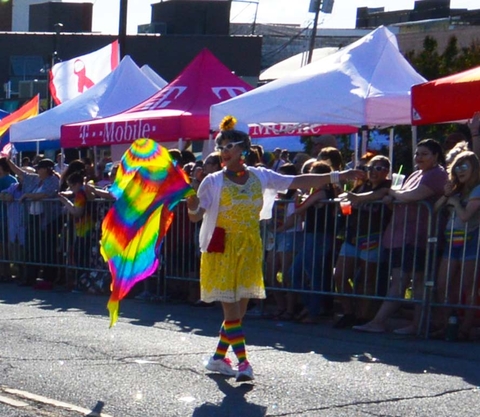 Glitter, rainbows, costumes and corporate logos: At first glance, Pride parades may appear to just be one big party. But peek beneath the surface, and you'll discover that Pride is celebrated by a diverse network of groups, each with their own rich history.

Even the rainbow flag itself has a fascinating story. Harvey Milk, the San Francisco Supervisor who was the first openly gay elected official in California, challenged his friend, gay rights activist Gilbert Baker, to come up with a symbol of pride for the community.

Thirty volunteers hand-dyed and stitched together two of the rainbow flags he designed, and they were flown for the first time over San Francisco's 1978 Pride Parade. The rainbow flag is now used as a symbol of LGBTQ+ Pride around the world.

Here's a glimpse into some of the participants in a typical Pride parade, along with information about their histories and why they march.

In San Francisco, Oklahoma City, New York and a number of other cities around the world, groups of women on motorcycles lovingly referred to as "Dykes on Bikes" march in the Pride parade each year.

The tradition started in San Francisco in 1976, when a group of around 25 women motorcyclists met at the front of the San Francisco Pride Parade to help lead the group through the streets.

One of those riders in coined the name "Dykes on Bikes," playfully reclaiming a word that was, at the time, widely used as a slur for lesbians. It was so catchy that it stuck, and several decades later, there are official Dykes on Bikes chapters all around the world guided by the mother chapter in San Francisco.

In addition to leading Pride parades and supporting philanthropic efforts that serve the LGBTQ+ community and women's groups, Dykes on Bikes has also set an important legal precedent.

From 2003 to 2008, they fought their way all the way to the US Supreme Court for the right to trademark their name after being denied a patent because "dyke" can be perceived as offensive. Eventually they won, establishing that the US First Amendment grants marginalized groups the right to determine for themselves which words are offensive to them and which are not.

While the more playful elements of drag are now beloved in mainstream American culture, drag's history is deeply political. More than 40 US states have at one time had laws on the books barring "cross-dressing," and many weren't overturned until relatively recently. As recently as 2011, a person perceived as a man wearing women's clothing could technically be arrested in New York state "impersonating a female."

Today, dominant cultural norms still often dictate that it's distasteful—or even shameful—for women to present themselves as masculine and for men to present themselves as feminine. Drag culture revels in flouting those gender norms, giving people safe places to proudly, boldly celebrate the parts of their gender expression the rest of the world forces them to repress.

While drag queens are often more visible, drag kings (women who dress up and perform on stage as men) have been around for just as long, and they too hold an important place in the movement. They're also gaining visibility—think of Kate McKinnon playing Justin Bieber and Jeff Sessions on "Saturday Night Live." And women don't always perform drag as kings: Female drag queens, or women who perform alongside men in drag as women, have been making waves in the drag scene for decades.

By taking cultural ideals about femininity and masculinity to their extreme through elaborate costumes and performances, both drag kings and drag queens poke fun at gender norms and encourage us to question our assumptions about what it really means to present ourselves as masculine or feminine in the world.

Some of the terminology is new, but transgender and non-binary people have been a critical part of the LGBTQ+ liberation movement since it began. Long before Caitlyn Jenner made "transgender" a household word, trans pioneers like Christine Jorgensen, who publicly came out as trans in the 1950s, and Sylvia Rivera, who was instrumental in the Stonewall Riots, advocated for greater visibility and acceptance for the transgender community.

Historically, the transgender community has frequently been excluded from the broader movement for lesbian, gay and bisexual equality. For example, trans people were left out of early drafts of federal legislation that would protect LGBTQ+ people from workplace discrimination because gay activists felt the bill had a better chance of succeeding without their inclusion.

Thanks to increased visibility and the hard work of transgender activists, the trans community is more broadly embraced within the wider LGBTQ+ movement today. Transgender people are now included in those efforts, though the US has yet to pass federal workplace protections against discrimination based on sexual orientation and gender identity.

Some cities, including San Francisco and Toronto, also host a separate Trans March in addition to the annual Pride March. The trans community often marches in Pride Parade with their own flag, which consists of five horizontal stripes: Two light blue, two pink and one white in the center.

Many people don't know that the first North American Pride march was organized by a bisexual woman. Her name was Brenda Howard, and she's been dubbed the "Mother of Pride."

While gay men and lesbians are often the most visible faces of the movement, bisexuals represent around 50 percent of the LGBTQ+ community. The "bisexual umbrella" is often used to include people who identify as queer, pansexual, or fluid or anyone attracted to more than one gender.

In both places, bisexuals report being told that their sexual orientation is "just a phase," or that they need to "pick a side." And because many bisexuals wind up in opposite-sex relationships (as a result of there being more straight people in the world), they're often mistakenly perceived as straight and excluded from LGBTQ+ activities and spaces.

In recent years, the bi+ community has gained visibility and increased acceptance both in mainstream culture and within the LGBTQ+ community. They often march with their own flag, which consists of three stripes: Pink, lavender and blue.

LGBTQ+ people of color, including famous figures like the late Bayard Rustin and Audre Lorde, have been instrumental in the community's fight for equality since it began.

But the LGBTQ+ community is not immune to racism, and LGBTQ+ people of color often experience being in a "double minority"—not fully accepted within mainly white LGBTQ+ communities, or by straight members of their own ethnic group.

Historically, members of racial minorities have often felt pressure to choose between advocating either for racial justice or LGBTQ+ equality, rather than being empowered to advocate for their identities as a whole.

In recent years, activists have advocated for greater visibility and inclusion of people of color within LGBTQ+ communities, raising awareness that many media portrayals of LGBTQ+ history equality erase the contributions of people of color, and adding a black and brown stripe to the top of the traditional rainbow Pride flag to call for greater inclusion.

In many cities, Black, Latino, and Asian and Pacific Islander contingents march under their own banners, and in some cities, various ethnic groups organize separate events and marches in addition to the main Pride parade to celebrate their cultural heritage and its place within the greater LGBTQ+ community.

While much of the opposition to same-sex marriage came from religious groups, many religious institutions have also embraced the LGBTQ+ community and joined the movement for equality.

Religious groups that march in Pride events, oftentimes under their own banners, include Presbyterians, Unitarian Universalists, Catholics, Jewish congregations, United Church of Christ, Quakers, Wiccans, the Evangelical Lutheran Church and some Muslim congregations.

There's even a group of Mormon mothers who've dissented from the church's formal stance condemning LGBTQ+ people to embrace and support their LGBTQ+ children, and they've been known to offer free hugs during Pride events in Utah.

Groups that advocate for social justice both inside and outside the LGBTQ+ community often march in Pride parades.

This often includes groups doing work related to HIV and AIDS, many of which have been tireless advocates for the LGBTQ+ community since the 1980s. They took action and launched "Act Up" to protest the high cost and lack of availability of HIV treatments, and to provide desperately-needed health care and hospice services to the community.

Homelessness affects LGBTQ+ people at higher rates than the rest of the population, and nonprofit groups aimed at providing support and LGBTQ+-welcoming shelters often have a presence at Pride events to help raise awareness about their services.

Groups that advocate for civil liberties (like the ACLU), for environmental justice, (like the Sierra Club) and for pacifism (like Veterans for Peace) often attend Pride parades under their own banners to show their support for LGBTQ+ equality, both as members of the community and as straight allies.

In uniting all of these diverse groups, Pride is both a celebration of how far we've come, and an opportunity to look ahead at the work that's yet to be done and how we can come together to get there.