The importance of having an LGBTQ+ candidate for president 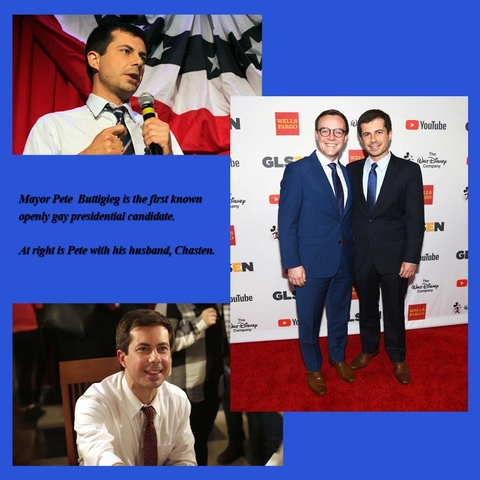 On many levels, having South Bend, Indiana, Mayor Pete Buttigieg running for president is history-making. But in January, when he first began to explore entering the race for the Democratic nomination, most news organizations focused on the novelty of having an openly gay man in the race.

Months later that novelty seems to have abated as more and more voters see and hear him and know how smart and how genuine he is. He isn’t trying to downplay his life as a member of the LGBTQ+ community. His husband, Chasten Buttigieg, often appears with him. Pete talks frankly about being in the closet and about coming out at age 33.

Many voters seem not to care much that he is gay. The change in voter’s attitudes is perhaps one major impact on the LGBTQ+ community of having Buttigieg in the presidential race: It shows that contrary to the truth in the past, an LGBTQ+ person can be taken seriously for the highest office in the country.

When I was growing up, no one even talked about homosexuals. As more of us mustered up the courage to be open, being out was considered the end of any career, let alone any aspiration to run for political office.

But make no mistake; it was important having millions of us being out, so our families, our colleagues at work and our friends knew someone who was LGBTQ+. They recognized we were the same people they knew when we were in the closest; they just knew more about us.

Today, in many states we have civil rights protections, and we have marriage equality. None of these changes would have happened if we had stayed in the closet.

Because of that, Pete Buttigieg could come out in 2013 while running for reelection as mayor. He knew he wasn’t alone.

As much as the opinion of people has swung from disapproval to approval, there are still plenty of people who believe we have no right to exist. We probably aren’t going to change their opinion, but many others may only have the beliefs left over from their parents or their church. They may not know any openly LGBTQ+ people.

In an interview with CNN’s Kate Bolduan, Buttigieg said, “It’s not lost on me that at no point in the last, probably, a hundred years would somebody like me be taken even a little bit seriously. Something’s different right now, and I’m not going to miss this moment.”

Now, they can see someone who they really like running for president. And oh, he happens to be gay and have a husband. With these positive role models, perhaps they’ll find LGBTQ+ people aren’t so bad after all.

For me though, there is an even more important impact on the LGBTQ+ community – the impact on youth and children and Pete and Chasten agree. In Bolduan’s interview with the couple, they acknowledge the power of the image of a gay married couple on the national political stage.

“We have talked about what it would have meant to either one of us when we were young to see that,” Mayor Buttigieg said.

These are not minor impacts on our community. Because of Pete Buttigieg, win or lose, we may see more acceptance and be taken more seriously.

And all those LGBTQ+ children out there growing up can see that they too can come out and have a wonderful, open life ahead of them.