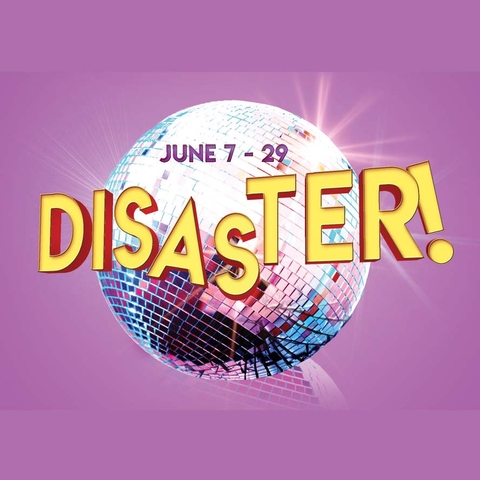 The Pollard Theatre concludes its 32nd season with Disaster!, a hilarious musical comedy trip into the 1970s. Co-written by Seth Rudetsky and Jack Plotnick, Disaster! blends one-part spoof and one-part musical revue into a laugh riot musical which runs at Guthrie’s Pollard Theatre from June 7 through 29.

Placed in the wildest decade ever, Disaster! delivers earthquakes, tidal waves, infernos and unforgettable 70s hits like Knock On Wood, Hooked On A Feeling, Sky High, I Am Woman and Hot Stuff and an hysterically funny cast of some of Oklahoma’s most celebrated performers.

Following an extended Off-Broadway run and a limited Tony-nominated (Jennifer Simard, Best Featured Actress in a Musical) Broadway engagement, Disaster! is a New York Times Critics Choice winner and is quickly becoming one of the most produced musicals in the country.

Critics have called it (New York Times) “a delirious goof of a musical” and (z100 – New York Radio) “the funniest musical since Book of Mormon.

Directed by a Pollard favorite, Matthew Sipress-Banks (The Producers), Disaster! promises to have audiences wrapped into a steady mix of side-splitting laughter and toe-tapping nostalgia for its line-up of 1970s musical classics.

“After the success of The Producers, we knew we desperately wanted Matthew [Sipress-Banks] to helm another comedy as soon as possible. Once we had him on board, he started to assemble this cast that we were utterly giddy to have on the Pollard stage. With just a few rehearsals, this company was giving me belly laughs, and I can’t wait to get them in front of our audiences.”

More about Disaster!: It’s 1979, and New York’s hottest A-listers are lining up for the opening of a floating casino and discotheque. Among the guests are a faded disco star, a sexy nightclub singer with her eleven-year-old twins, a disaster expert, a feminist reporter, an older couple with a secret, a pair of young guys who are looking for ladies, an untrustworthy businessman and a nun with a gambling addiction.

What begins as a night of boogie fever quickly changes to panic as the ship succumbs to multiple disasters, such as earthquakes, tidal waves, and infernos. As the night turns into day, everyone struggles to survive and, quite possibly, repair the love that they’ve lost, or at least escape the killer rats. From the moment the glitter ball starts spinning, you’ll be dancing in your seat and rolling in the aisles.

Disaster! runs June 7 through 29 at the Pollard Theatre in Guthrie. Tickets are on sale now and are $30 with senior, military, teacher, student, and group discounts available. Performances are Fridays and Saturdays at 8 p.m., Thursdays, June 20 and 27 at 8 p.m., and Sunday matinee performances, June 16 and 23 at 2 pm.

Support for “Disaster!” is provided by Pollard Corporate sponsor, BancFirst, and presenting sponsors Jim and Theresa Dewhurst, and Jeff and Carol Hirzel. The Pollard Theatre Company is produced with additional support from the Oklahoma Arts Council, National Endowment for the Arts, the Kirkpatrick Foundation, the Inasmuch Foundation, Shubert Foundation, Guthrie Tourism, and Guthrie NewsLeader.