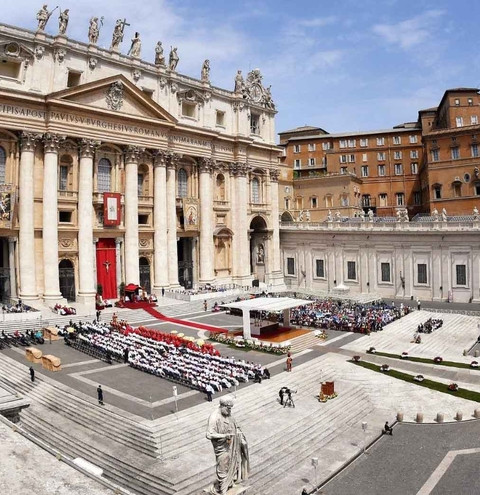 The Vatican has come under fire from LGBTQ groups after releasing a guide to sexuality for Catholic schools across the world that describes non-binary gender as "fictitious."

The church's education ministry on Monday released the 31-page document, called Male and Female He Created Them, for parents, students, school leaders and bishops.

The paper said that we are now facing an "educational crisis" in the field of sexuality, adding that the "process of identifying sexual identity" was being made difficult by the "fictitious (construct) known as 'gender neuter' or 'third gender.'"

It comes as many countries mark Pride Month, an annual celebration of the LGBTQ community, and LGBTQ Catholic campaign groups were quick to condemn the Vatican's guidebook.

New Ways Ministry, a US-based ministry which advocates for LGBTQ Catholics, slammed the document as a "harmful tool that will be used to oppress and harm not only transgender people, but lesbian, gay, bisexual people, too."

Francis DeBernardo, the ministry's executive director, said it would confuse those struggling with questions of gender identity and sexual orientation -- and could lead to self-harm, addiction and even suicide. Research has found LGBTQ teens have a much greater risk of suicide.

"The only truth that the document reveals is that the Vatican remains ill-equipped to discuss gender and sexuality in the modern world," DeBernardo said. "The Vatican remains in the dark ages, promoting a false teaching that relies on myth, rumor, and falsehoods."

Reverend James Martin, a Jesuit priest and author of Building a Bridge, which looks at the Catholic Church's relationship with the LGBTQ community, said in a tweet that the Vatican paper "rightly calls for 'dialogue' and 'listening,' but sets aside the real-life experiences of LGBT people."

"Sadly, it will be used as a cudgel against transgender people, and an excuse to argue that they shouldn't even exist," he added.

The Vatican paper adds that "a person's sex is a structural determinant of male or female identity."

The document is not signed by Pope Francis but does include quotes from the pontiff.

The paper comes amid fresh scrutiny of the church's stance on LGBTQ issues. In recent years, a number of government institutions around the world have recognized non-binary gender identities.

And while the Catholic Church has traditionally had conservative ideas on gender and sexuality, in 2016 Pope Francis said the church owed LGBT people an apology for historically condemning homosexuality.

In recent years, the church has also come under intense scrutiny over its handling of sexual abuse cases and, in March, the Vatican issued tougher rules governing the sexual abuse of minors.