HIV Testing: A critical strategy for ending the HIV epidemic 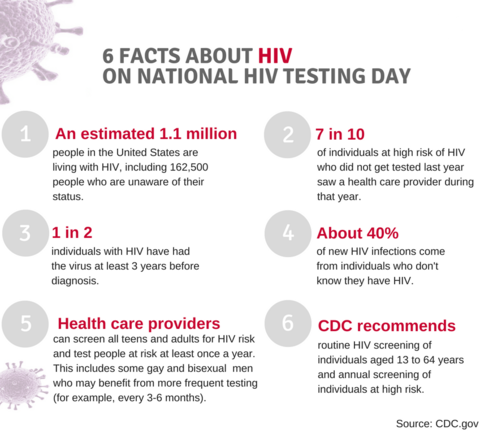 Every year, National HIV Testing Day is observed on June 27 to raise awareness of the importance of HIV testing and diagnosis.

An estimated 1.1 million people in the United States are living with HIV, and 1 in 7 – or nearly 165,000 people – are unaware of their diagnosis. The Centers for Disease Control and Prevention (CDC) recommends that everyone between the ages of 13 and 64 is tested at least once as part of routine healthcare and more frequently for those with specific risk factors.

The National Association of County and City Health Officials (NACCHO), the voice of the country’s nearly 3,000 local health departments, recognize the life-saving efforts of its members as they work every day to keep their communities safe and healthy.

HIV testing is a key component of the federal government’s recently announced initiative Ending the HIV Epidemic: A Plan for America, which lays out a strategy for reducing HIV infections by 75 percent in five years and by 90 percent by 2030. Ensuring that people know their HIV status is the first step in getting connected to HIV care and treatment for those who are HIV-positive.

People with HIV who take medication as prescribed and stay virally suppressed can live long, healthy lives. Further, we have the scientific evidence that “Undetectable = Untransmittable” (or U=U), meaning those who are on treatment and virally suppressed have effectively no risk of sexually transmitting HIV to a partner. For patients to access the full benefits of HIV care and treatment, HIV testing must be simple, accessible, and routine.

Local health departments are essential partners in increasing the number of people who are aware of their HIV status and connecting individuals to HIV prevention and care services, regardless of status. Local health departments provide HIV testing at clinics and through community outreach efforts. To ensure that HIV testing is available to all people in all communities, and that testing efforts are reaching priority populations, including communities of color, gay and bisexual men, transgender men and women, youth, and people who inject drugs,  local health departments work in partnership with community-based organizations, community members, and healthcare providers.

“On National HIV Testing Day, NACCHO commends local health departments across the country who work each day to help individuals in their community know their status, get linked to care and build community-level partnerships to support our nation’s push towards ending the epidemic,” said NACCHO Chief Executive Officer Lori Tremmel Freeman.

“As an organization, we are committed to supporting local health departments and advocating on their behalf to ensure the necessary resources and capacity for increasing access to HIV testing, reducing disparities in HIV outcomes, and ensuring that our nation’s plan to end the HIV epidemic in the U.S. is a success.”

For this awareness day, local health departments are hosting and participating in testing events and using health communication resources to raise awareness of the importance of HIV testing in ending the HIV epidemic. For example, through the National HIV Testing Day Community Partnership, health departments and HIV/AIDS service organizations are working with Walgreens and Greater Than AIDS to broaden the reach of HIV testing and information in non-traditional settings and help people understand the latest in HIV prevention, treatment, and care.

This year, more than 265 community partners are supporting the 2019 Testing Day activation, which will provide free HIV testing in participating Walgreens stores in more than 260 cities, including San Antonio.  “The San Antonio Metropolitan Health District is committed to reducing HIV infections and raising awareness about HIV in collaboration with Greater Than AIDS and Walgreens by providing free HIV testing throughout San Antonio on Thursday, June 27, 2019,” said Anita Kurian, Assistant Director of Communicable Disease at the San Antonio Metropolitan Health District.  “Approximately 18% of people who are infected with HIV in San Antonio are unaware of their HIV status; therefore, we encourage all people to be tested on National HIV Testing Day, but also adopt HIV testing as a part of their regular health and wellness check-ups.”