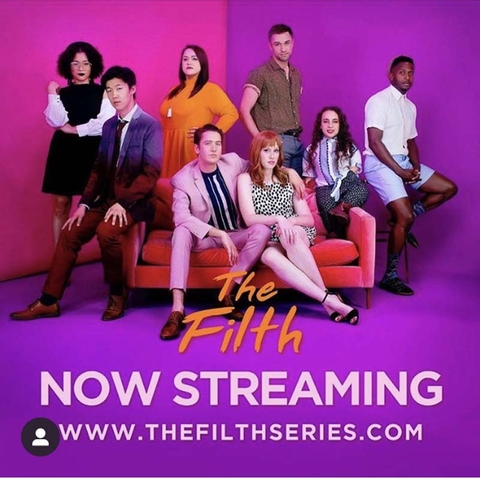 A new LGBTQ+ series was released today on YouTube, and its co-writer is former Oklahoman, Jake Delaney.

The series, titled The Filth, has screened at three festivals, Inside Out in Toronto, SeriesFest in Denver, and Frameline in San Francisco. It won Best Comedy Writer at Denver’s SeriesFest in June.

Synopsis: Desperately trying (and failing) to navigate their complicated love lives, Stella and Max, two delusional, queer creatives in LA, struggle to make progress while attempting to maintain the only stable relationship they have: their friendship.

SeriesFest reviewers said this about the series, “Featuring a colorful cast of friends and frenemies, The Filth hilariously lives up to its title, a truly filthy mess of hijinks and drama.”

The first five episodes of The Filth were released on YouTube today. The team hopes to generate an audience, which will allow them to write and produce more episodes.

Oklahoma City resident, Karen Delaney said, “It's a very inclusive and diverse series and a good series for anyone in the community. Learning about yourself, love and more.”

But Karen may be a little biased as Jake, The Filth co-writer and co-star, is her 27-year-old son.

“He was always in a play in high school, and usually had the leading role,” she said. “Jake went to Heritage Hall here in Oklahoma City and is a great actor and singer.

“He lived in Oklahoma from the time he was ten-years-old until he went to Boston University for college. At Heritage Hall, due to his talent in the arts, he was popular. Because of this, he escaped most of the bullying.”

Karen knew when Jake was very young that he was gay.

“Pretty much from the time he was 20 months,” Karen said. “At least by the age of two, we knew he was gay.”

Karen said Jake loved Dorothy from The Wizard of Oz, and when he was just able to walk, he would put on her red shoes, which resembled those “ruby slippers,” and Jake would walk around the house in them.

“My brother was gay,” Karen said, “I was more sensitive to gay people because I was very close to him and many of his friends. Throughout Jake's life, we were just waiting for him to tell us.”

But Karen felt it was still hard for Jake to come out to his family.

“We were having dinner in New York when Jake was in college at Boston University,” she said. “I told him I love you no matter what, and that he can tell me anything. And that's when he came out to me."

Not only did Jake co-write The Filth series, but he also co-stars in the series as well.

Click here bit.ly/YouTubeTheFilth to watch The Filth or visit www.thefilthseries.com for more information.