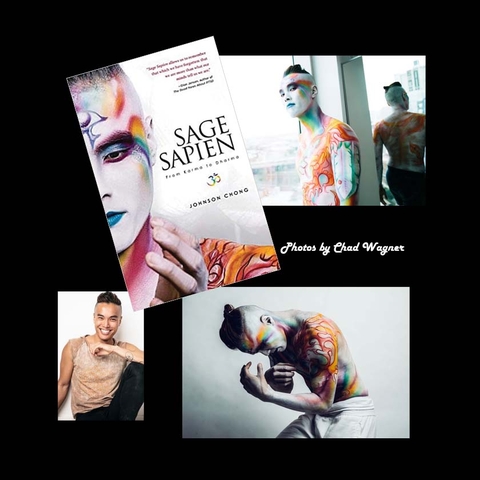 “Out of my body was unleashed the ugliest cry I had ever had. A snotty cry where I hiccupped mucus like I was having an asthma attack. I let go of all the guilt I felt for being gay and the hate for being born into my family,”

In Sage Sapien: From Karma to Dharma, international yogi, meditation teacher, and self-mastery guide Johnson Chong weaves deeply personal anecdotes throughout the telling of his journey of spiritual exploration, revelation and liberation in his quest to help others harness the power and benefits of meditation.

From beatings at the hands of his strict, traditional Chinese mother and acting out as a frustrated youth, to studying with yogic mentors and ultimately opening his own guided meditation studio, Sagehouse, in Singapore, Chong’s story is at once raw, fascinating and informative.

“Imparting his esoteric wisdom with the knowledge of a yoga master and the attitude of a New Yorker, Chong is frank, funny, and a talented storyteller,” say critics.

“While not all of us are inclined to dive into meditation to the sublime depths that Johnson does, or can afford to jet off to far-flung sacred places to study with the masters, what Chong makes clear in Sage Sapien is that getting spiritual is a very good thing.”

His painful story of coming out to his strict, traditional, deeply disapproving, and often verbally and physically abusive Chinese parents are specific to Chong, but will also ring familiar to many LGBTQ people who are compelled, yet struggling to “live their truth,” fearful of how their family, friends and community will react.

“Yes, I am a Chinese-American gay male, and I hope to be a voice for my community,” says Chong, “but this book really is for anyone who feels like an outcast regardless of what they identify as.”

Chong says he hopes “that whoever reads the book will become inspired to transmute their old pain stories into a new story that is not bogged down by the obsessiveness of worrying about the past or fearing the future.”

About the Author, Johnson Chong: A native New Yorker and international yogi, meditation teacher and Self-Mastery Guide, he founded Sagehouse based in Singapore to help people reconnect the mind, body and spirit.

He is also the creator of Exodus Retreats, where he leads transformational retreats to sacred places around the world.

As a professionally trained actor and perpetual student of esoteric wisdom, he integrates his love of storytelling to empower life-changing shifts in consciousness through his speaking engagements and group coaching.

Sage Sapien: From Karma to Dharma is his first book.