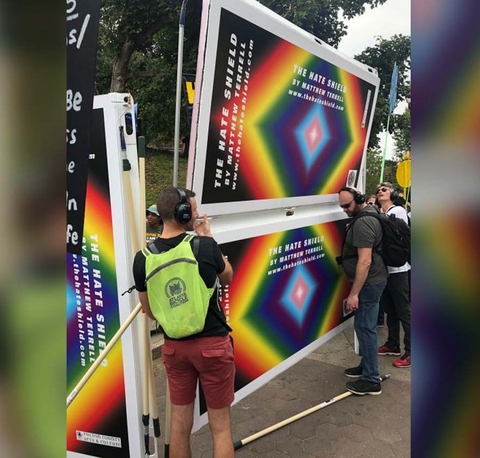 Atlanta, which is holding pride events this weekend, is no different, according to 33-year-old artist Matthew Terrell.

He's been attending Atlanta Pride for a decade. For the past few years, he's watched as protesters show up, "yelling slurs" and other messages with loud megaphones, he told CNN.

Some attendees tried to block out the protesters, like The Pansy Patrol -- a local group that will hold up cutouts of giant flowers to shut out the protesters. Others try to yell over their megaphones, Terrell said.

But the strategies weren't effective.

"People weren't wearing hearing protection, it's like being right next to a speaker at a rock concert," Terrell said. "You can't yell over a 120-decibel megaphone."

So, Terrell decided to try to solve some of these problems.

"I wanted to...counter protest in a peaceful way and ultimately make the Pride experience better for the people passing by," he said. "That when they walk by, they won't see, hear or notice people with the megaphones yelling at them."

With three years of planning, six months of construction and funding from the Atlanta Mayor's Office of Cultural Affairs and the Fulton County Department of Arts and Culture, his work was complete.

The final product was four 4x8 foot sound-blocking panels Terrell called The Hate Shield. They're making their debut at this year's Atlanta Pride, posting up at the entrance of the event.

Terrell said he found a 25 percent noise reduction when using the panels. He bought his own megaphone and measured the panels' effectiveness himself, finding a drop from 94 decibels down to 72 decibels with just one panel.

But noise reduction isn't the panels' only feature. The back of the panels -- the side that faces the anti-LGBTQ protesters -- is mirrored, so when protesters are yelling, they see themselves reflected back.

Terrell called it one of the key aspects of The Hate Shields.

"I want them to see what they look like doing this," he said. "I think there's a strong message in, 'Look at yourself. Is this really what you want to put into the world?' They probably have never had this reflected back at them."

The Hate Shields are also purposefully rectangular, so they can be stacked horizontally or used vertically for maximum blockage. Terrell is taking commissions for the shields, in hopes their use spreads.