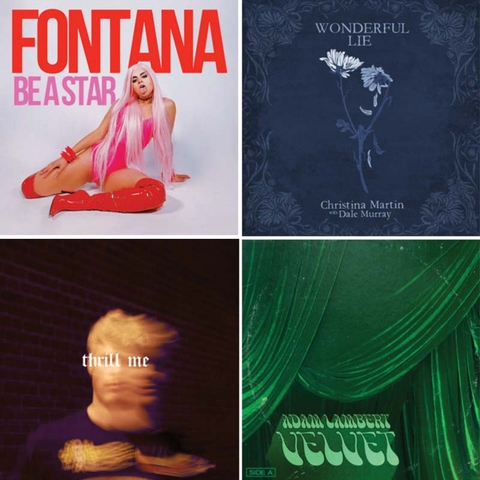 FONTANA – Be a Star

Former Brazilian favela-dweller turned Swedish pop star Gabriel Fontana has just released a bopping new single, Be a Star. After escaping violence in Brazil, FONTANA landed in Sweden and secured a spot on the popular Swedish Idol, only to be cut early in the process.

However, the producers made the wise decision to invite the artist back for a spinoff, wherein they were proclaimed the champion of Swedish Idol Revanschen. The hitmaker opens the tongue-popping track with evocative lines like “A nonbinary mind, but you still don’t get me right” and “What’s wrong with being both when you want me like I’m gold?”

The music ascends to grandiose heights atop a marching-band drumline and synths that will have any listener tapping their feet.

Canadian singer-songwriter Christina Martin’s new album Wonderful Lie sees her combining emotional covers with original material for a catalogue entry of shimmering pop. The set opens with the classic ABBA cover The Winner Takes It All, which serves to draw even the most ambivalent listener in.

Through mostly stripped-down arrangements, Martin seamlessly blends her own material with classic cover songs. At its core, it’s a covers album, but that’s not to say that her own original songs don’t stand on their own. She’s reinterpreted her own previous works to give them a similarly bare-bones treatment here.

One track that stands out from the pack is Finsbury Park, which opens with a steady drumbeat, and wherein she channels another Canadian chanteuse, Sarah Slean. It’s more of an interesting outlier, however, and still finds its own way amongst the strongly acoustic, dreamy set. Other notable tracks include Dylan’s Make You Feel My Love and Boudleaux Bryant’s much-covered Love Hurts.

Brooklyn-based singer, songwriter, and videographer returns with the honey-voiced Thrill Me, a slow burner about one penultimate night together. The staccato beat and wobbling synths create a dreamscape atop which his saccharine voice floats effortlessly.

Of tracks like Thrill Me, he says, "Love stories and hook up stories are a way to escape and renew and others are my road to healing.” In the track, he pleads, “Thrill me one more time,” and reminisces, “hooking up like Valentine’s, probably for the last time.”

This latest single comes on the heels of a string of tracks released by the golden-haired crooner in the past few years, each of them seeing his popularity rise. There are apt comparisons to Troye Sivan, Sakima, Lauv, and others, and his music has been featured on BBC Radio 6, Billboard Pride, PopMuzik, and elsewhere.

Adam Lambert – VELVET: Side A

Pop vocal powerhouse and perennial Freddie Mercury successor is back with a new six-song EP as the first of a two-part project.

VELVET: Side A sees the superstar taking a staunchly 70s, funk-driven rock sound, unlike his previous work. This new set documents a turning point in his oeuvre, which can be a hard sell for loyalist fans, but here Lambert reminds us why he became a star in the first place.

On the opener, he declares, “You try to put me in a box, make me something I’m not / Don’t give a fuck, ‘cause I’m gonna take back my superpower,” effortlessly blending a thick bassline with his smooth falsetto.

The influence of his time touring with Queen won’t be lost on any listener. However, this amped up 70s-rock sound may underpin the set, but there are embellishments of R&B, danceable pop, and even disco to round out the tracks, without leaving them feeling oversaturated or gimmicky.