Trump calls for Sotomayor, Ginsburg to recuse themselves from "Trump-related" cases 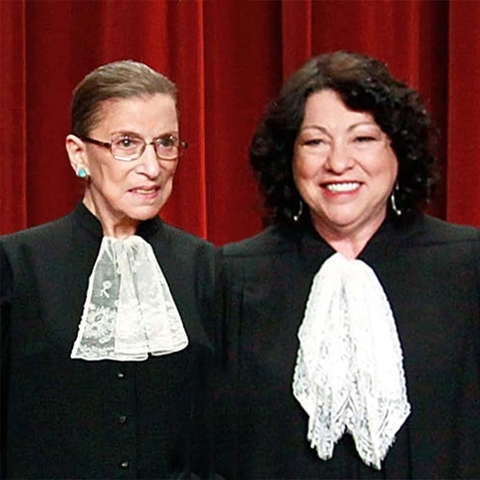 President Donald Trump on Tuesday called for two liberal Supreme Court justices to recuse themselves from cases involving him following a scathing dissent issued by one of them, blasting the justices as the court considers a number of cases critical to his presidency.

"I just don't know how they can't recuse themselves for anything having to do with Trump or Trump-related," Trump said of Justices Sonia Sotomayor and Ruth Bader Ginsburg during a trip to India.

"Her statement was so inappropriate when you're a justice of the Supreme Court," he said of Sotomayor, who was appointed to the court by President Barack Obama.

Friday night, Sotomayor castigated the government for repeatedly asking justices on an emergency basis to allow controversial policies to go into effect and charged her conservative colleagues on the court with being too eager to side with the Trump administration on such requests.

While Sotomayor's dissent targeted the federal government -- not The Trump administration per se -- she was speaking about the recent uptick in emergency petitions concerning many of the President's policies. And her criticism of her conservative colleagues was pointed.

Sotomayor wrote that granting emergency applications often upends "the normal appellate process" while "putting a thumb on the scale in favor of the party that won." Targeting her conservative colleagues, she said "most troublingly, the court's recent behavior" has benefited "one litigant over all others."

Pressed by reporters on what Sotomayor said that was "inappropriate," Trump replied, "She's trying to shame people with perhaps a different view into voting her way and that's so inappropriate, so let's see what happens."

The President also went after Ginsburg for going "wild during the (2016 presidential) campaign," adding that she "later sort of apologized" for comments she made at the time.

In July 2016, Ginsburg extensively criticized then-candidate Trump as a "faker," saying he has an "ego" and that the press "seems to be very gentle with him" on his decision to not release his tax returns. She later said she regretted making the "ill-advised" statements.

Ginsburg has not recused herself from Trump-related issues. An email to the court's public information officer was not immediately returned.

A lot at stake for Trump

Trump's calls for recusal come as he has a lot at stake before the high court. The justices will issue opinions this term on the President's personal bid to shield his financial documents and the government's efforts to phase out an Obama-era program shielding around 700,000 undocumented immigrants from deportation. They are also considering whether to take up cases concerning the Affordable Care Act and sanctuary cities.

Trump administration officials have railed against the increase in nationwide injunctions issued by lower-level courts that have blocked new policies. In fact, just recently, Justices Neil Gorsuch and Samuel Alito, two Republican appointees, have lamented that lower courts are bringing issues to a screeching halt with these types of orders and halting other courts from the opportunity to weigh in.

Trump's attention to the court is an unwelcome event for Chief Justice John Roberts, who has been trying ardently to keep the justices out of the political fray.

The President's call for Ginsburg and Sotomayor to recuse themselves was also made by him in a pair of tweets before his news conference, with Trump writing, "I only ask for fairness, especially when it comes to decisions made by the United States Supreme Court!"

Meanwhile, another call of recusal came Monday night to Justice Clarence Thomas, one of the court's most conservative justices, from a group that fights Trump's judicial nominees.

The group told Thomas it is "clearly inappropriate and unethical" for him to rule in cases involving the President because of reports concerning his wife Ginni Thomas' involvement in compiling lists of potentially disloyal White House staff. The justice has previously been asked to recuse himself from certain cases because of his wife's political work.

Supreme Court justices themselves decide whether recusal is warranted as they are not subject to the code of judicial conduct that is in place for lower court judges.

In 2011, Roberts addressed this in a year-end report, writing that while "some observers" have suggested that because the Judicial Conference's Code of Conduct applies only to the lower federal courts, the Supreme Court is "exempt from the ethical principles that lower courts observe."

Roberts said that "observation" rests on misconceptions. He said that all members of the court consult with the code in "assessing their ethical obligations" and that it plays "the same role for the Justices as it does for other federal judges."