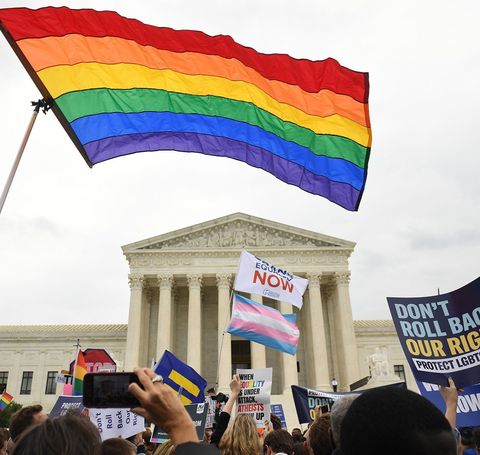 LGBTQ Rights among topics being discussed by SCOTUS. File photo.

The Supreme Court justices met privately on Friday to discuss pending cases and presumably how they will handle the rest of a blockbuster term as the nation and the world self-quarantine in the midst of a pandemic.

At the regularly scheduled conference a "number of justices" participated remotely by phone according to Kathy Arberg, the Court's public information officer. That's because six of them are 65 or older. Justices Ruth Bader Ginsburg and Stephen Breyer are in their 80s -- well within the government's standard for individuals at a higher risk.

Arberg declined to specify which justices chose to stay home, but said all nine are "healthy" and are following public health guidance.

She noted that the justices are temporarily foregoing their usual custom -- that dates back to the late 19 Century -- to shake each others' hands at the beginning of each conference. The tradition was established, according to the Court's website, "as a reminder that differences of opinion on the Court did not preclude overall harmony of purpose."

The justices will release an orders list Monday morning at 9:30 am ET as well as opinions at 10:00 am ET, although they won't take the bench to do so.

Earlier in the week, the court said that in order to abide by "public health precautions" it would postpone oral arguments for the next sitting, which had been scheduled to begin Monday. The most important case from that sitting is President Donald Trump's bid to shield his financial documents.

The move to postpone is exceedingly rare, but there is precedent. In 1918, arguments were postponed in response to the Spanish flu epidemic. The calendar was shortened in 1793 and 1798 in response to yellow fever outbreaks.

In announcing this postponement, the court said it would "examine the options for rescheduling" the 11 cases.

In addition, on Thursday the court extended deadlines for petitions that have not already been granted.

Even before the onset of the virus, the court was behind schedule in issuing its opinions.