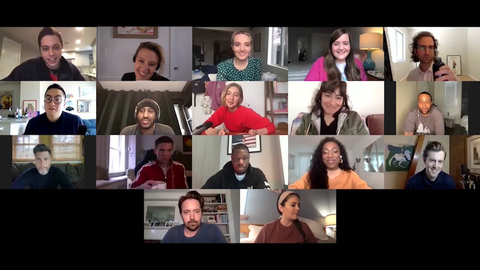 "Live from Zoom, it's sometime between March and August."

That's how Kate McKinnon kicked off NBC's "Saturday Night Live," which included sketches that were produced by the "SNL" cast from their homes amid the coronavirus pandemic.

"Saturday Night Live At Home" attempted to recreate the feel of a normal episode by having sketches, Chris Martin as a musical guest and Tom Hanks as host.

"It's good to be here, but it's also weird to be here hosting 'Saturday Night Live' from home," Hanks said from what appeared to be his kitchen. "It is a strange time to try and be funny, but trying to be funny is 'SNL's' whole thing, so what the heck, let's give it a shot."

Hanks, who was wearing a suit, added that this was the first time he's worn anything other than sweatpants in a month.

"This 'Saturday Night Live' is going to be a little different, for one thing, it's been filmed entirely by the 'SNL' cast who are currently quarantined in their homes. ... Also, there's no such thing as Saturdays anymore," he said. "And we're not really live, but we're doing everything we can to make this feel like the 'SNL' you know and love."

Hanks, who was diagnosed with coronavirus last month, said that he was the celebrity canary in the coalmine when it came to the virus.

"Ever since being diagnosed I have been more like America's dad than ever before since no one wants to be around me very long and I make people uncomfortable," Hanks said.

"SNL" also had sketches that included everything from Larry David playing Sen. Bernie Sanders from his home, Pete Davidson singing in his mom's basement, a sketch that made fun of Zoom conferences and "Weekend Update: Home Edition" with hosts Colin Jost and Michael Che.

The two made jokes about current events before getting an official update on the pandemic from Alec Baldwin's President Donald Trump.

"My approval rating is up, my TV ratings are through the roof and every night at 7 p.m. all of New York claps and cheers for the great job I'm doing," Baldwin as Trump said over the phone.

Baldwin's Trump then said that "we have to listen to the experts on this one" including his senior adviser Jared Kushner, Fox News host Sean Hannity and MyPillow inventor and infomercial star Mike Lindell.

"All absentee ballots are covered in coronavirus," Baldwin's Trump said. "Happy Easter, everybody!"

Away from the laughs, the show's musical guest, Chris Martin of Coldplay, played a rendition of Bob Dylan's "Shelter From The Storm."

The NBC variety series, which was originally scheduled to return from hiatus on March 28, suspended production last month because of the outbreak.

"SNL" joins other late-night broadcasts that have returned to the airwaves, albeit remotely. NBC's own "Late Night with Seth Meyers" came back last week with Meyers hosting the show from his attic.