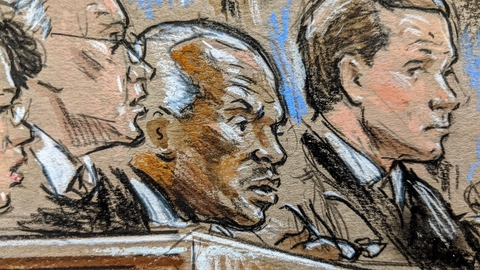 Supreme Court Justice Clarence Thomas said the landmark Roe v. Wade case that paved the way for legalized abortion in the US is "without a shred of support" from the Constitution. Sketch by Bill Hennessy/CNN.

Supreme Court Justice Clarence Thomas said the landmark Roe v. Wade case that paved the way for legalized abortion in the US is "without a shred of support" from the Constitution.

The comment came in a fiery dissent to a court decision that blocked a controversial Louisiana abortion law that critics said would have closed nearly every clinic in the state. In his stinging dissent, the conservative justice wrote that Roe v. Wade "created the right to abortion out of whole cloth, without a shred of support from the Constitution's text."

"Our abortion precedents are grievously wrong and should be overruled," Thomas writes. "The idea that the Framers of the Fourteenth Amendment understood the Due Process Clause to protect a right to abortion is farcical."

In the decision of Roe v. Wade in 1973, established the constitutionality of a woman's right to have an abortion.

Thomas has been adamant in recent years that the high court revisit the precedent, saying it has "spiraled out of control."

"Although this case does not present the opportunity to address our demonstrably erroneous 'undue burden' standard, we cannot continue blinking the reality of what this court has wrought," Thomas said last June.

While the conservative Chief Justice John Roberts sided with the liberals on Monday in the name of court precedent, Thomas expressed that he is much more willing to take a closer look reversing the precedent of Roe.

"As the origins of this jurisprudence readily demonstrate, the putative right to abortion is a creation that should be undone," Thomas wrote. "But today's decision is wrong for a far simpler reason: The Constitution does not constrain the States' ability to regulate or even prohibit abortion. This Court created the right to abortion based on an amorphous, unwritten right to privacy."