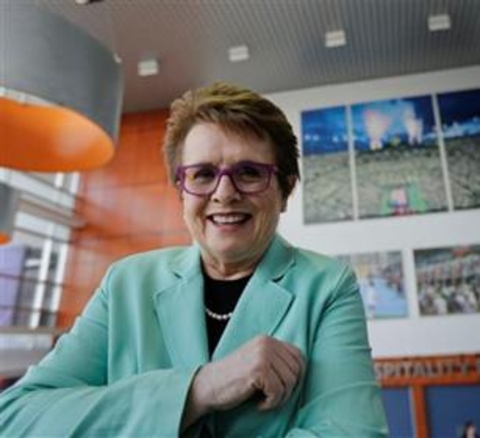 In this photo taken Thursday, Sept. 4, 2014, Billie Jean King poses for a photo inside the hospitality pavilion at the U.S. Open tennis tournament in New York. King is so busy attending events during the tournament, she hardly has time to watch matches at the venue that bears her name. (AP Photo/Charles Krupa)

New York (AP) — Billie Jean King is so busy attending events during the U.S. Open, she hardly has time to watch matches at the venue that bears her name.

However, King still has plenty of opinions on tennis and other topics. She believes Serena Williams can win "tons" more Grand Slam titles and Michael Sam "made history" despite not making the roster of an NFL team.

Williams will try for her sixth U.S. Open title and 18th major on Sunday when she faces Caroline Wozniacki. King won four of her 12 major singles titles in New York, her last coming 40 years ago against Evonne Goolagong at Forest Hills.

"She should win at least six or seven or eight," King said. "If she wins this, it will have saved her year, basically."

Williams is attempting to turn her season around after failing to reach the semifinals of the Australian Open, French Open and Wimbledon. She's gone 18-1 since Wimbledon, winning tournaments in Stanford and Cincinnati en route to the U.S. Open. She's relied on big serves — around 118 mph — to reach the final at Flushing Meadows.

Sam recently got cut from the St. Louis Rams, but latched onto the Dallas Cowboys' practice squad. King hopes "this will tee him up for other opportunities. I think it's great he's getting a second chance."

Cowboys coach Jason Garrett asked her "to come to training camp to talk to the guys" but her schedule didn't allow it. Maybe next year.

Here's what to know about King's last U.S. Open title, gay athletes and longevity on the court:

Forest Hills: Plenty has changed at the U.S. Open over 40 years, from the wooden rackets, training methods and venues. Players held their own balls, used one towel to wipe their brow and stood during changeovers. Spectators sat on lawn chairs near the baseline of side courts.

Technology replaced the person with a finger on net to feel let serves, now read by a sensor. Speed guns record serve velocity.

"I was behind the whole match. People said the tennis was great. I just remember being at the net shaking hands. I was in shock," King said of the 3-6, 6-3, 7-5 win in horseshoe-shaped main stadium featuring about 12,000 wooden seats. "I was so exhausted, I think I dropped my racket.

"It was such an exciting day because it was the first time I remember it was standing-room only. I knew tennis was gaining momentum."

On Michael Sam: King said Sam was on the "bubble" at his defensive position in Rams training camp, but "he's made history anyway."

So when will gay athletes no longer be news? "When we have more guys who are gay and it's a non-issue. I don't know how many gay football players in the NFL it will take."

King, who was outed in 1981, said progress comes "one by one" and "you just keep chipping away." She said openly gay athletes, including Brooklyn Nets player Jason Collins, Phoenix Mercury center Brittney Griner and Sam, have recently paved the way.

NFL quarterbacks could help make it a non-issue, King said.

"One of the biggest things that would help is if one of the quarterbacks who is straight, or all collectively say, 'This is a non-issue. Let's get on with it. As long as they do their job, we don't care.'

"The Bradys, the Lucks, the Romos, Payton Manning, Eli Manning, if all those guys would just say — 'This is so ridiculous, as long as the guy can play, we don't care what color, what sexual orientation.'

"If the media stops talking about it, it will be helpful. The reason we cover it, it's an exception. That's the way the world works, the way the news works."

Major Wins: Serena is one major win away from tying Chris Evert and Martina Navratilova. With the Grand Slam record of 24 majors held by Margaret Court, how many more does Serena have left in her?

"Oh, she's got tons of majors, as long as she takes good care of herself and stays focused," King said. "I think it's possible to get to 22 and tie (Steffi) Graf. I don't know about 24 and Margaret. It's possible if she stays healthy. She's still strong and still has the best serve in the game. She is a true performer."

Longevity: King won her last singles title at 39 and last doubles at 40. Venus Williams is 34 and Serena turns 33 this month.

Venus played three matches in 24 hours last week — doubles, singles, doubles — spending about 7 hours on the court. In 1967, King won the singles, doubles and mixed doubles titles at what was then called the U.S. Lawn Tennis Association championships.

King recalled at Wimbledon in 1973 at age 29, she played five matches in 24 hours when she won all three titles.

The keys to a long career?

"It's the passion to play and willing to play the price," King said. "It gets harder as you get older. Roger (Federer) has a game that's going to hold up well, too, his style of play. That's the magic — he's the (Mikhail) Baryshnikov of tennis."