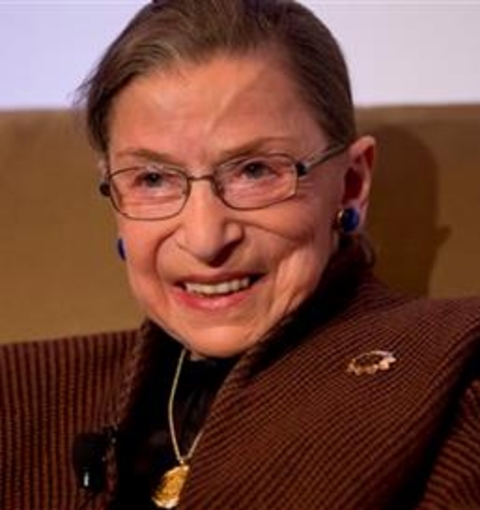 A Supreme Court spokeswoman says Justice Ruth Bader Ginsburg has been released from the hospital after having a heart stent implanted and is expected to be at work when the court hears its next round of oral arguments on Monday, Dec. 1, 2014. (AP Photo/Jacquelyn Martin, File)

Washington (AP) — Justice Ruth Bader Ginsburg was released from the hospital Thursday after having a heart stent implanted to clear a blocked artery, a Supreme Court spokeswoman said.

The 81-year-old jurist was sent home and was expected to be at work when the court hears its next round of oral arguments on Monday, spokesman Kathy Arberg said.

Ginsburg was rushed to MedStar Washington Hospital Center late Tuesday after experiencing discomfort during exercise with a personal trainer.

She has had a series of health problems, including colorectal cancer in 1999 and pancreatic cancer in 2009.

The justice, who was appointed by President Bill Clinton in 1993, has rejected suggestions from some liberals that she should step down and give President Barack Obama a chance to name her successor.

Her hospitalization just three weeks after elections handed Republicans control of the Senate raised anew the question whether Obama would be able to appoint a like-minded replacement.

Ginsburg's procedure came after a blockage was discovered in her right coronary artery, Arberg said.

Ginsburg, who leads the court's liberal wing, has for years been fending off questions about whether she should retire and give a Democratic president a chance to name her successor. In addition to two cancer operations, she was hospitalized after a bad reaction to medicine in 2009 and suffered broken ribs in a fall two years ago.

But the court's oldest justice has not missed any time on the job since joining the high court.

For several years, liberal academics have been calling on Ginsburg and, to a lesser extent, 76-year-old justice Stephen Breyer, to step down to ensure that Obama could nominate a younger justice with similar views.

Lawyers who are close to the Obama administration have made the same argument, but more quietly.

In one sense, it's already late for that, because the Senate will be in Republican hands come January, making confirmation more difficult.

Still, the picture would look worse yet for the Democrats if a Republican should win the presidential election in 2016. A retirement then by a liberal justice would allow the appointment of a more conservative justice and potentially flip the outcome in important 5-4 decisions in death penalty, abortion, even gay rights cases in which the liberal side sometimes prevails.

The decision to leave the pinnacle of the legal world never is an easy one, even for justices with health problems.

Chief Justice William Rehnquist remained even as he suffered through thyroid cancer. He died in September 2005, still chief justice.

Ginsburg has repeatedly rebuffed suggestions that it's time to step down. She remains one of the court's fastest writers and she has continued to make frequent public appearances around the country.

"So who do you think could be nominated now that would get through the Senate that you would rather see on the court than me?" she said in an Associated Press interview in July.

As for the next presidential election, she has said on more than one occasion, "I am hopeful about 2016."

In an October interview in The New Yorker magazine, Obama said Ginsburg was "doing a wonderful job."

"She is one of my favorite people," Obama told the magazine. "Life tenure means she gets to decide, not anybody else, when she chooses to go."

In 2005, Supreme Court Justice Anthony Kennedy said nothing publicly when he had a stent inserted to keep an artery open after experiencing mild chest pain. The court revealed the procedure when Kennedy returned to the hospital to have the stent replaced 10 months later.

Stents are mesh scaffoldings inserted into about half a million people in the U.S. each year to prop open arteries clogged by years of cholesterol buildup. Doctors guide a narrow tube through a blood vessel in the groin or an arm, inflate a tiny balloon to flatten the blockage, and then push the stent into place.