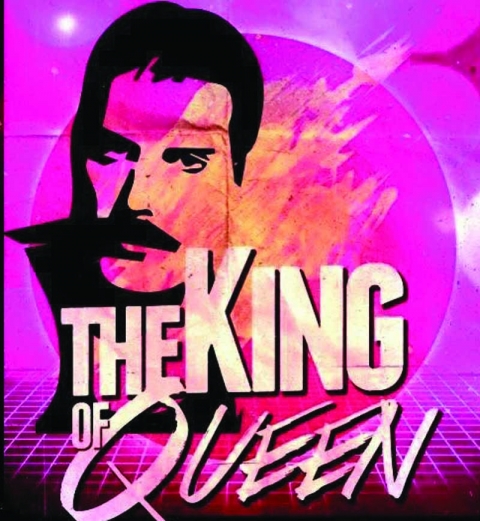 Leslie Hensley, also known by her stage name, Balthazar, has assembled another stellar cast of local talent to perform a show built around the songs of Queen, in celebration of Freddie Mercury, gender fluidity and the courage to be your truest self.

King of Queen features a story written and narrated by local poet, Zuniga as well as a band featuring LaRissa Conn, Jacob Abello, Bear Rodriguez & Jacob Becannon, Crystal Huffman and Holly Monrad and a full choir playing the epic music of Queen. The story chronicles the life of a trans man, played by nationally celebrated drag king and performer, Max Warner, who sees Freddie Mercury as his guardian angel. Hensley is not only directing the show but will also play Freddie Mercury with her usual unstoppable intensity.

Hensley, owner of GreaseTrap Gallery and art educator, is the brains behind B.L.O.W. (Balthazar’s Ladies of Wrestling) an over-the-top, full-contact wrestling event featuring pyrotechnics, dark comedy and fierce ladies. King of Queen is a different kind of show for her. “This year I wanted to do a show that was not only entertaining but also had a message. Freddie is the ultimate hero. When I was a kid I just wanted to jump around and be in that band. Every inner dialoge can be narrated by a Queen song,” Hensley said.

Internationally touring poet and activist, Zuniga sees this collaboration as a unique way to promote trans visibility and gender fluidity.

“I identify as queer femme so, though I can’t possibly know the experience of being trans, my partner is a trans man and it felt important to write an honest narrative that gives visibility to a story many don’t see. It also frames classic Queen songs in a whole new light,” said Zuniga.