Sex Ed: What we’re not learning 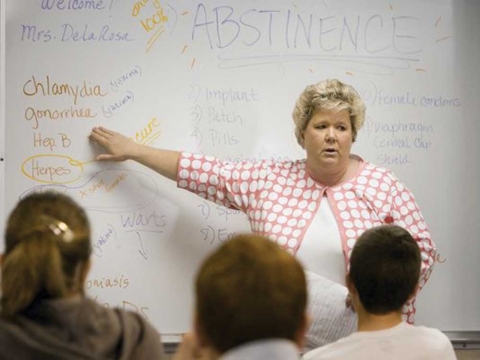 High school is meant to be a time for the public education system to teach young people what they need to know in order to succeed in the adult world. I don’t know how many times a year we hear teachers telling us that they’re preparing us for our future. And I want to believe that, I really do. But there’s a huge gap between what we need to learn, and what we are actually being taught.

Now any high schooler can rant for hours about how what we’re learning in class won’t apply to our daily lives. It’s a valid argument. Calculating the standard deviation for a data set, having the atomic masses of elements memorized and knowing the symbolic meaning of a poem probably won’t be something that comes up in most people’s lives, unless they’re helping their kid with their homework. I’ve advocated for years to create a required course on living essentials. Teaching how to change a tire, get a loan, fix your toilet, etc.

One of the biggest problems with what we’re learning in school is what we’re not learning: sex ed.

In Kansas your parent has to sign off to allow you to take sex ed, and materials from these classes are not allowed to be given to students who don’t have this signature. This means the kids with most likely sexually conservative parents aren’t getting educated by the school at all in this area, and they are the ones who need it the most.

Do you really think the kids whose parents aren’t letting them sit in a boring sex ed class are really doing a great job (if at all) of teaching their children about sex? And in Oklahoma schools aren’t even required by the state to have a sexual education program.

Even when kids do take the course, they don’t get much out of it. In 2006, 87percent of schools taught abstinence as the most effective method to avoid pregnancy and STIs (sexually transmitted infections). 37 states require that sex ed includes abstinence, 26 require that abstinence is stressed. The abstinence-only method is still funded by the federal government for $50 million dollars a year.

I know this might sound a little crazy, but we teenagers aren’t idiots. Of course we know that not having sex means we won’t get pregnant. Duh. That’s like if we started a campaign against texting and driving that told people “Hey! Did you know that the best way to keep from texting and driving is to not own a phone?!” Gee whiz, what an ingenious idea, how did nobody think of that before.

So I’ve got torn up text books and bats in our classrooms while the government is shelling out $50 million a year for a useless program? It makes no sense. Even the sex ed we are getting on contraception is subpar. There are tons of facts I should have been learning in class that I found out by doing my own research. I had to teach myself sex ed, and let’s be real, how many kids are going to do that?

When I wanted to bring in a speaker to talk about some of the information we were missing in our classes for our feminist club, that wasn’t allowed either. I invited a worker at the South Wind Women’s Center to come speak to us, but found out it’s actually illegal. There’s actually a bill that passed in 2013 banning anyone who works at an abortion clinic from volunteering or working for public schools. And this doesn’t just mean they can’t speak on sexual education, a mother who works as a secretary at an abortion clinic, cannot legally bake cookies for her daughter’s bake sale.

I’m not kidding, a friend of mine was told this by her employer at the clinic. Even when we’re trying to seek out our own education, that’s not allowed either. So what are we supposed to do? Make it up as we go along? Because that sounds like the reason STIs are becoming ever more prevalent in youth.

This issue is more of an epidemic than a minor problem. I know kids that think you can get AIDS by kissing, kids who think women pee and have babies out of the same hole and kids who don’t know how to use a condom.

Our schools are doing one hell of a job of telling us not to have sex, but they certainly aren’t educating us on staying safe.

Unfortunately until these problems are solved or at least improved, learning about sexual education seems to be up to the individual student themselves. For those wanting to learn more, www.advocatingforyouth.org is a great place to start.

Educate yourself, because it seems our schools won’t.