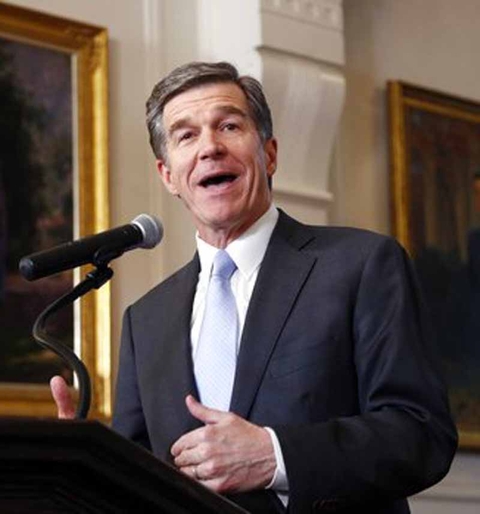 North Carolina Gov. Roy Cooper holds a press conference at the Executive Mansion in Raleigh, N.C., Thursday, to announce that he signed a compromise replacement bill for HB2. Chris Seward, The News & Observer via AP.

Raleigh, N.C. (AP) — North Carolina has rolled back a state law that blocked some anti-discrimination protections for LGBT people, but questions persist whether politicians have done enough to coax back the businesses and sports leagues who withdrew lucrative plans from the state.

Initial reactions were largely muted on Thursday's compromise repeal that seems to have pleased no one, and which advocates say still leaves gays, lesbians and transgender people vulnerable to discrimination.

The law passed by the Republican-led legislature and signed quickly by Democratic Gov. Roy Cooper repeals the best-known section of House Bill 2: a requirement that transgender people use the public restrooms that correspond to the sex on their birth certificate.

HB2 supporters argued that the law was needed to preserve people's privacy and protect them from sexual predators. Opponents said that was nonsense and that the danger was imaginary.

At stake is whether the repeal legislation was enough to persuade some businesses, state and city governments and sports organizations including the NCAA to end their de facto boycott of North Carolina. An Associated Press analysis (http://www.gayly.com/bathroom-bill-cost-north-carolina-376b) this week found that the law would cost the state more than $3.76 billion in lost business over a dozen years.

"House Bill 2 stopped a number of businesses from expanding here or coming here to North Carolina," Cooper said at a news conference after signing the repeal. "Companies that I have talked to, companies that I have recruited, who were hesitant or refusing to bring businesses to our state before the passage of today's bill now are telling me: We are coming."

Consultants who advise companies looking for a good place to build operations and create jobs were divided on whether North Carolina had turned a page.

Companies seeking to avoid business risks and costs generally avoid places embroiled in turbulent social issues, said Paige Webster, a site selection consultant in Phoenix, Arizona. The repeal could be enough to restore North Carolina's reputation as a dynamic, progressive state, which took a hammering in the year since HB2 became law, he said.

"I think that stigma will go away," Webster said. "It's going to open the doors for corporations to take another look."

But the angry reaction by gay-rights and other liberal groups over provisions that prevent municipalities from passing their own anti-discrimination ordinances until December 2020 means the issue could remain a red flag for companies, said Pete Mohan, a site selection consultant in Jacksonville, Florida. The signal is that the angry discussions over LGBT rights and bathroom protections haven't ended with the repeal law, he said.

"I think it's far from a panacea. It's more of a stopgap than anything else," Mohan said. "The whole situation has sort of soured the broader national desire to locate in North Carolina."

The compromise plan was worked out under mounting pressure from the NCAA, which threatened to withhold sporting events from the basketball-obsessed state until at least 2023. The NCAA pulled events from the state over the past year in part because six states had banned non-emergency spending on travel to North Carolina, for example by sports teams from public universities.

The stakes are high for North Carolina: The Associated Press calculated that the state made $71.4 million from 28 neutral-site NCAA events in the five academic years ending last spring. A potentially more lucrative slate of events is in jeopardy in this latest round of decisions.

Cities including Raleigh and Greensboro have submitted 133 bids to host NCAA championship events in such sports as golf, swimming and basketball through the 2021-22 academic year, with a potential economic impact of about $250 million, according to the North Carolina Sports Association.