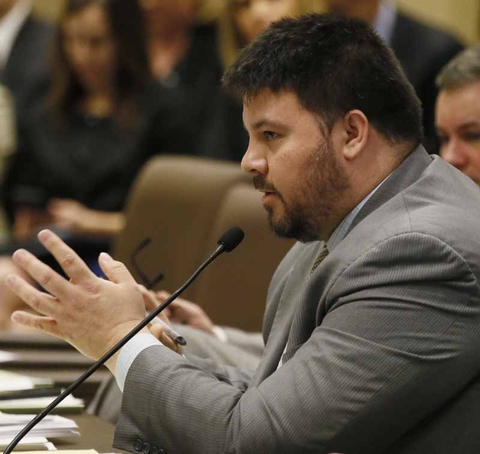 The introduction to the resolution reads, “A Resolution imposing punishment upon Senator Ralph Shortey for disorderly behavior pursuant to the provisions of Section 30 of Article V of the Oklahoma Constitution.”

The resolution was authored by Senate President Pro-Tempore Mike Schulz (R-Altus), and co-authored by 43 other Senators. There are 48 senators in the chamber.

The resolution effectively suspends Sen. Shortey from the Senate. He can no longer perform his duties as a Senator, other than presumably appearing on the Senate floor.

Among the provisions of the punitive resolution are:

1. Suspended his positions as vice-chair of the Committee on Energy and the Subcommittee on Select Agencies of the Appropriations Committee;

2. Suspended his membership on all committees he is a member of - the Committee on Retirement and Insurance, Committee on Judiciary and Committee on Appropriations;

4. Ordered him to return custody of his state-owned laptop computer and any other state-owned property in his possession to the Senate;

5. Took away his office in Room 412 of the State Capitol and his assigned parking space;

6. Removed his name as author or co-author of any legislation under the control of the Senate;

7. Suspended all Sen. Shortey’s allowances for expenses of the office and postage, and for mileage and other travel expenses;

8. Reassigned sponsorship of all pages scheduled as of March 15, 2017 to be under the sponsorship of Senator Shortey to the President Pro Tempore, and allow him to schedule no more pages for the remainder of the 2017 legislative session.

The Senate also “reserves the right to further exercise its powers pursuant to the provisions of Section 30 of Article V of the Oklahoma Constitution or any other provision of law or rule.”

“This is not a presumption of guilt or innocence," said Senate President Pro Tempore Schulz: "The Oklahoma Senate has full faith that the judicial system will play out appropriately and bring this matter to a lawful conclusion. This resolution reserves the right of the Oklahoma Senate to pursue further action if more facts come to light. It would be inappropriate to comment any further due to the pending investigation.”

The entire case has now been turned over to the Cleveland County District Attorney's Office, who will determine whether to file charges, according to TV station Fox 25.

KOCO5 had earlier reported that Moore police have recommended three prostitution-related charges against Sen. Shortey. According to the station, “The charges include: soliciting prostitution of a minor, prostitution within 1,000 feet of a church and transporting for the purpose of prostitution.”

Shortey is among the most conservative Senators in the Oklahoma legislature, and served as a member of President Trump’s Oklahoma campaign team. He posted on his Facebook page the day after the Super 8 motel incident, that he had had lunch with Trump’s son Donald, Jr.

Shortey has been quoted by several media as planning to issue a response, but so far, hasn’t done so.

To read the full text of SR 7 click here.