One of President George H.W. Bush's most lasting legacies? The Supreme Court 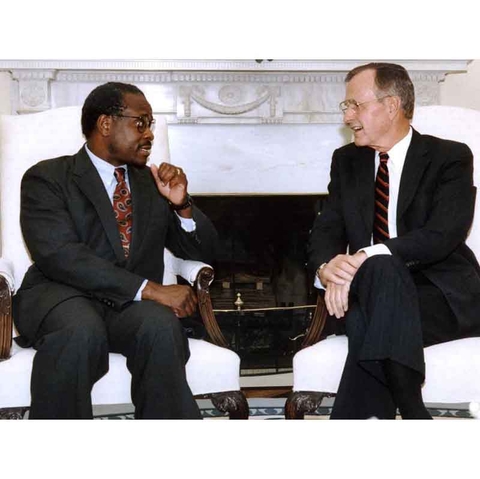 As a contingent of well-wishers flood the nation's capital to pay respects to George H.W. Bush, one of the former president's most lasting legacies took his seat Monday morning at the Supreme Court to hear arguments in a tax case.

It's been more than quarter century since Bush left the White House, but Justice Clarence Thomas — appointed by Bush in 1991 — serves as a reminder that a president's impact can reverberate long after his presidency. Thomas is hard at work trying to reshape the law and his former clerks now populate the Trump administration and the lower courts. Whether a president gets the opportunity to fill a Supreme Court vacancy is often left to chance or circumstance, but Bush got two chances, and he chose two very different judges.

Thomas took the seat of the civil rights legend Justice Thurgood Marshall. At the time, the nomination of the 43-year-old Thomas was a crushing blow to civil rights groups, which had hoped in vain that Bush might take the opportunity to fill the seat with someone closer to Marshall's judicial philosophy. Instead, Thomas, now the longest serving justice, is perhaps one of the most conservative members of the court, sometimes writing alone and hardly ever speaking during oral arguments, but laying a marker of conservative jurisprudence that will last for decades to come.

Thomas has emerged as a star of the conservative Federalist Society and frequently speaks before the group to standing ovations. "I've gotten to the point where it's like the priesthood. This is what I was called to do," Thomas told an audience in 2013.

His supporters were stunned when the Smithsonian opened a major museum in 2016 meant to promote and highlight the contributions of African Americans and almost entirely ignored the achievements of Thomas, who rose from poverty to serve as the country's second African-American associate justice of the Supreme Court. The museum did have a picture at the time of Anita Hill, who famously blew up Thomas' confirmation hearings with allegations of sexual harassment. Thomas — who always vehemently denied Hill's accusations — never addressed the Smithsonian controversy publicly.

Meanwhile, his former clerks have high positions in the Trump administration. Neomi Rao, for example, serves as the administrator of the Office of Information and Regulatory Affairs, an agency within the White House Office of Management and Budget. She has also been nominated to fill Justice Brett Kavanaugh's previous seat on the US Circuit Court of Appeals for the District of Columbia. Gregory Katsas served in the White House Counsel's Office during the turbulent first few months of the Trump administration and now sits on that court, which is considered the second most powerful court in the land, as it is often asked to review the workings of federal agencies.

The former clerks play a large role outside of government as well. William Consovoy — a private lawyer — is a lead lawyer challenging Harvard's admission policy in a case that is almost certain to land before the Supreme Court and could change the face of affirmative action.

Justice David Souter, on the other hand, was Bush's first nominee in 1990. Souter retired in 2009. A relative unknown, the brilliant jurist who preferred his homestead in New Hampshire to the pomp and circumstance of the nation's capital, was an enormous disappointment to the right, becoming a consistent liberal vote on the court. In 1992, he voted to uphold the core holding of Roe v. Wade. He also forever changed the nomination process.

"No more Souters" became a rallying cry of the Federalist Society. After his appointment, the conservative group worked to create an efficient vetting machine made up of sympathetic lawyers with the goal of ensuring that no future Republican president ever appointed an unknown to the bench again.

Just before he retired, Souter told an audience that each fall he underwent an annual "intellectual lobotomy" when he had to return to the bench.

Indeed, the fact that Don McGahn, who would later serve as White House counsel, put out a list during the Trump campaign of possible Supreme Court nominees was likely a delayed reaction to the Souter nomination.