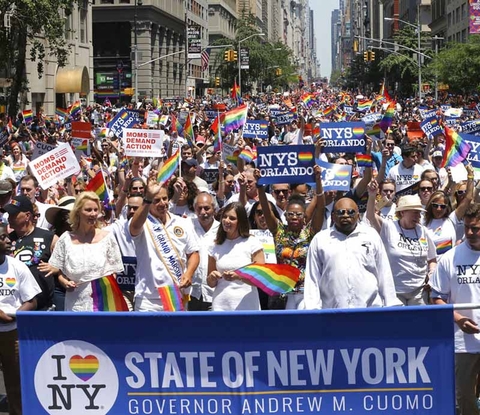 New York (AP) — Gay pride marches in New York City, San Francisco and in between this weekend will have plenty of participants — and also protests directed at them from other members of the LGBT community, speaking out against what they see as increasingly corporate pride celebrations that prioritize the experiences of gay white men and ignore the issues continuing to face black and brown LGBT people.

The protests disrupted other pride events earlier this month — in Washington, D.C., where the No Justice No Pride group blocked the parade route, and in Columbus, Ohio, where four people were arrested after a group set out to protest violence against minority LGBT people as well as the recent acquittal of a police officer in the shooting death of Philando Castile, a black man, during a traffic stop.

"Nobody wants to feel dropped in a community that prides itself on diversity," said Mike Basillas, one of the organizers of the planned New York City protest action by No Justice No Pride.

In Minneapolis, organizers of the Twin Cities Pride Parade planned for this Sunday asked the police department to limit participation following the acquittal of police officer Jeronimo Yanez in the death of Castile. The openly gay police chief said the decision was divisive and hurtful to LGBT officers, which the organizers acknowledged. But Twin Cities Pride Board Chairwoman Darcie Baumann said the decision was made to be sensitive to those grieving after the verdict "and seeing those uniforms brings angst and tension and the feeling of unrest."

In Philadelphia, where racial relations in the LGBT community are beginning to mend after a year of community protests, the introduction of a rainbow flag — the traditional symbol of LGBT unity and diversity — that added black and brown stripes to represent blacks and Latinos has spilled over into a national debate.

The recent flare-up of racial tensions comes as no surprise to Isaiah Wilson, director of external affairs for the National Black Justice Coalition, one of the few national groups focused specially on black LGBT rights.

He said the broader LGBT-rights movement "has been whitewashed" — dominated to a large extent by white gay men.

"Black queer and trans folks have always been there, but our contributions have been devalued," Wilson said.

He said major LGBT-rights groups need to be frank in discussing the issue of racism, as well as recruiting and supporting non-white leaders.

"Until the mainstream LGBT groups address this, we're not going to move forward and you'll continue to see this pressure," Wilson said. "In my opinion, the pressure is good — it has us talking."

Shannon Minter, a white attorney who is the legal director of the National Center for Lesbian Rights, said LGBT people of color were justified in challenging racist aspects of the LGBT-rights movement.

"The real test will be, can the LGBT movement own up to its historic legacy of racism and evolve to be more accountable and inclusive of people of color?" Minter, a transgender man, wondered. "If not, then it will cease to be a major political movement."

One reason for the tensions, according to some activists, is a racial divide when it comes to the LGBT-rights movement's agenda. For years, many national groups focused on legalizing same-sex marriage nationwide — a goal achieved in 2015. For many LGBT people of color, there continue to be more pressing issues, such as economic inequality, policing and incarceration.

"In a lot of places, we're just trying to survive," said Wilson.

That divide has led to controversy when attempts have been made to address race, as in Philadelphia. The city drew criticism last summer when activists raised concerns that the Gayborhood — the city's main gay enclave — discriminated against blacks. Gay blacks complained of dress codes banning Timberlands and sweatpants, of not being served in a timely manner at bars and of being stopped and asked for identification at clubs while white customers walked in unbothered.

In January, Philadelphia officials issued a report confirming longstanding racism in the Gayborhood and pledged to penalize businesses that did not make changes. Earlier this month, the city unveiled a new flag meant to be a more inclusive reflection of gay pride, with a black and brown stripe added to the existing rainbow motif. The flag's introduction stirred heated commentary from supporters as well as those who felt it was interjecting race unnecessarily.

Pride organizers around the country have taken steps to address the criticisms. In San Francisco, Sunday's pride event will be led by groups including the Bayard Rustin LGBT Club, SF Black Community Matters, African Human Rights, and Bay Area Queer People of Color. In New York City, the march organizers are putting a contingent of groups more focused on protest than celebration at the head of the event.

The LGBT community does need to confront these issues, said Michelle Meow, an Asian-American woman who is board president of San Francisco Pride, and "the pride celebration is a platform for that dialogue to happen."

New York City spokesman James Fallarino said if there are any disruptions or protests during the event, "We're going to make sure we do everything in our power to respect the people who are disrupting or protesting and to respect their message."