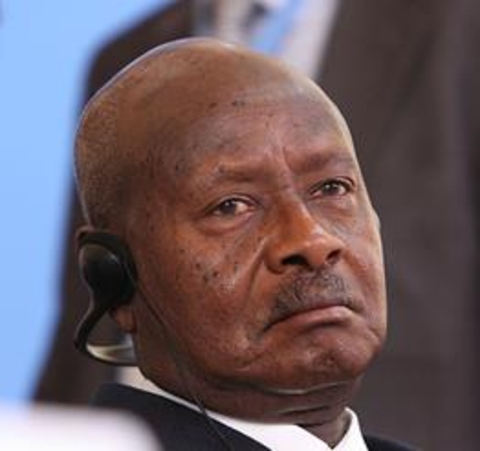 Museveni made clear he had no plans to sign the bill, said Santiago Canton of the Robert F. Kennedy Center for Justice and Human Rights, who attended the Jan. 18 meeting. "He specifically said this bill is a fascist bill," Canton recalled. "Those were the first words that came out of his mouth."

One month later, however, Museveni appears to have changed his mind, saying through a spokesman last week that he would sign the bill "to protect Ugandans from social deviants." Coming one month after Nigerian President Goodluck Jonathan signed into law his country's harsh anti-gay bill, which criminalizes same-sex marriage and activism, Museveni's new position highlights Western governments' apparent inability to temper governmental discrimination against gays in Africa.

The anti-gay bills are overwhelmingly supported by the general public in both Uganda and Nigeria, providing opportunities to win political points for two presidents eyeing re-election.

But international gay rights activists also blame donor countries, including the United States, which favor behind-the-scenes diplomacy intended to avoid a backlash that might come from more forceful engagement.

"We need a better strategy," said Julie Dorf, senior adviser at the Council for Global Equality. "We do believe that our government here in the U.S. needs to ramp up the potential consequences that countries might face for these regressive anti-human rights measures. I have no doubt that President Museveni watched very carefully what happened after President Jonathan signed the Nigeria bill. And the truth is, there wasn't much of a reaction."

"The Ugandan and Nigerian governments' decisions to treat their LGBT citizens like criminals cannot be accepted as business as usual by the U.S. government. We urge Secretary Kerry to recall both ambassadors for consultations in Washington to make clear the seriousness of the situation in both countries," said Chad Griffin, president of the group.

Human Rights Watch and the Robert F. Kennedy Center have also called on the State Department to temporarily recall its ambassador to Uganda for consultations.

Dorf said the U.S. ambassador to Nigeria, who recently went on a radio program to explain in Nigerian Pidgin English that Washington won't be cutting aid because of the new anti-gay law, should also be brought back for talks.

Other suggested actions include suspending visa privileges for officials behind the new laws; suspending bilateral delegations or exchanges in areas of interest to both countries; reviewing and potentially revoking both Uganda's and Nigeria's participation in the African Growth and Opportunity Act; and revoking invitations for Museveni and Jonathan to a U.S.-Africa summit planned for August.

These moves, though, could further jeopardize local activists who are already facing mounting vigilantism that seems to have been tacitly condoned if not openly supported by security forces, say activists. Last week a mob armed with wooden clubs and iron bars dragged 14 young men from their beds and assaulted them in Nigeria's capital, the latest in a series of attacks that has Nigerian gays fearing for their lives.

In Uganda, Cleo Kambugu of Transgender Support Initiatives Uganda said transgender women — who often have a hard time blending in to avoid anti-gay hostility — have borne the brunt of a rise in violence that followed parliament's passing of the Anti-Homosexuality Bill in December.

Though her organization does not have the resources for comprehensive monitoring, it has been made aware of up to 40 recent incidents involving mob violence, police harassment or both, Kambugu said.

She said the imposition of punishment by Western countries over anti-gay legislation could be harmful.

"That's going to make people hate (sexual minorities) more in Uganda. They'll say, 'You see? Our economic suffering is because of you guys,'" she said. "By doing that, you'd actually be strengthening these beliefs that this minority group is responsible for your problems."

It's a "tough dilemma," agreed Dorf of the Council for Global Equality.

"The truth is that most of the local activists in these countries are scared out of their minds right now. They're fearful of things getting even worse for them," she said. "They don't want the backlash which is inevitable when governments put more pressure, but not putting more pressure is making things even worse. We're really in a bind."

The State Department seems to be reacting more swiftly to recent incidents of anti-gay violence and hate speech in Africa. The U.S. ambassador to Ivory Coast was first to condemn an attack on the headquarters of that country's most prominent gay rights group last month. On Wednesday, Kerry responded quickly to the latest anti-gay rhetoric from Gambian President Yahya Jammeh, who said homosexuals were "vermin" and that LGBT stands for "leprosy, gonorrhea, bacteria and tuberculosis." Kerry said Wednesday that "the United States is deeply troubled by the hateful rhetoric used by President Jammeh ... All people are created equal and should be able to live free from discrimination, and that includes discrimination based on sexual identity and sexual orientation."

After Uganda's Museveni said he would sign the Anti-Homosexuality Bill, which allegedly was largely influenced by the work of American evangelicals in Uganda, U.S. officials including President Barack Obama have issued statements of protest.

Uganda's position has not wavered. In a series of Twitter posts after announcing Museveni would sign, government spokesman Ofwono Opondo slammed the international outcry, saying the U.S. is a "bully" and that "poor people have rights." He said those opposed to the bill should challenge it in court after it is signed into law.

Museveni hopes to get support from a controversial report by a team of Ugandan doctors that says homosexuality is a risk to public health that needs to be regulated "to protect the vulnerable."

"It is on the strength of that (report) I am going to sign the bill," he told ruling party lawmakers last week. "I know we are going to have a big battle with the outside groups about this, but I will tell them what our scientists have to say."

On Monday Opondo said on Twitter: "When the rant of gay activists is done over this bill, the world will move on."