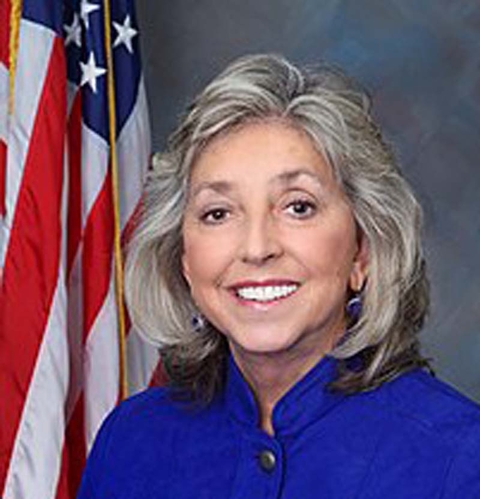 Representative Dina Titus of Nevada’s First Congressional District has introduced the Greater Leadership Overseas for the Benefit of Equality (GLOBE) Act with the support of top House Democrats and leading LGBTQ+ advocacy organizations. The legislation outlines a vision for U.S. leadership in the protection of LGBTQ+ rights around the world.

Earlier in July, U.S. Secretary of State Michael Pompeo announced the creation of the Commission on Unalienable Rights to advise the State Department on human rights – and appointed several commissioners with troubling records on LGBTQ+ issues. Meanwhile, the Trump Administration has refused to fill the State Department position of Special Envoy for the Human Rights of LGBTQ+ Persons.

The GLOBE Act would codify in law the Special Envoy position, require the State Department to document cases of human rights abuses and discrimination against LGBTQ+ people around the world, and institute sanctions against foreign individuals who are responsible for egregious abuses and murders of LGBTQ+ populations. Additionally, the bill insures fair access to asylum and refugee programs for LGBTQ+ individuals who face persecution because of their sexual orientation.

“No person should suffer from discrimination because of who they are or whom they love,” said Congresswoman Titus (NV-1). “Under the Trump Administration, the U.S. is failing to protect the rights of LGBTQ+ people at home and abroad. This bill will help restore our role in promoting LGBTQ+ rights around the world and punishing regimes that persecute people based on their sexual orientation or gender identity.”

“Around the world, far too many people face discrimination, harassment, and even violence because of who they are and who they love,” said Foreign Affairs Committee Chairman Engel (NY-16). “We simply cannot look the other way when the human rights of LGBTQ+ individuals are abused or ignored. This measure would ensure that pushing back against this sort of injustice is a foreign policy priority. I applaud Representative Titus for her leadership on this issue, and I’m glad to support her legislation.”

“As we continue to work toward full equality under the law for all Americans, we as a nation must also be champions for vulnerable LGBTQ+ people abroad,” said Congressman Cicilline (RI-1). “Nobody should be forced to live in fear simply because of their sexual orientation or gender identity. It’s long past time to pass the GLOBE Act to finally send the message that hatred and violence against the LGBTQ+ community will not be tolerated. I’m proud to join with Congresswoman Titus, Chairman Engel, and our allies in the House to reintroduce this critical legislation.”

“Our nation was built on the basis of equality and justice, that we promote a system that enforces the precept that all people are entitled to the same set of basic human rights,” said Congressman Lowenthal (CA-47). “These rights include the right to love who they chose and to be who they are without fear of punishment or death. LGBTQ+ rights are human rights.”

“As the State Department under Secretary Pompeo is creating a hierarchy of human rights with religious freedom as their sole priority, we fear that their true intention is to alienate the rights of LGBTQ+ people,” said Chair of the Council for Global Equality Mark Bromley. “The GLOBE Act is a remedy to that dangerous, ideological shift in our nation’s long-standing human rights policy.”

“While the Trump-Pence White House refuses to speak out against anti-LGBTQ attacks worldwide, it is essential that the U.S. Congress defend the human rights and protections of all people — including LGBTQ people,” said Human Rights Campaign Government Affairs Director David Stacy. “With the introduction of this legislation, Congress sends an important message that U.S. leaders remain committed to advancing human rights around the globe. We thank Rep. Titus for her leadership and advocacy on behalf of LGBTQ people worldwide.”