Sam excited about next phase of career 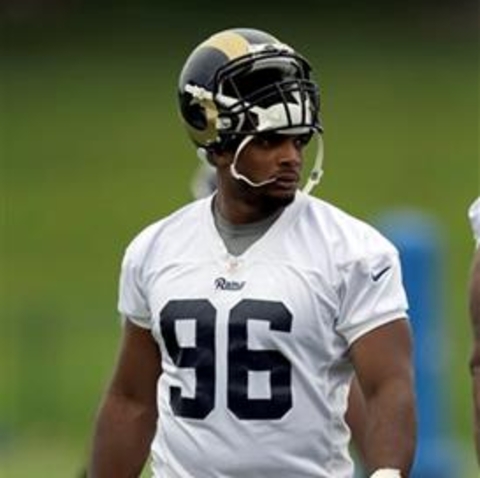 St. Louis (AP) — Now it starts to get intense for Michael Sam and the rest of the St. Louis Rams rookies.

The first openly gay player drafted in the NFL is enthusiastic about the challenge. Twice on Tuesday, he mentioned how enjoyable it was being back on the field and trading wisecracks with teammates.

"I'm so excited to be back with the guys," Sam said. "Football's fun."

Sam hopes there will be less attention about his sexual orientation, but added his focus has to be on making the team. He said he's in the best shape of his life, dropping 13 pounds in the month since the last OTA workout, weighing in at 257 pounds.

"Feeling great," he said. "It's just where I want to be speed-wise, so I can run fast and make plays. I want to be as fast as I can."

Sam declined to offer specifics about his 40-yard dash time, adding "I'm not worried about the combine."

He didn't have much to say about his experience at the ESPYS, where he received the Arthur Ashe Courage award. Sam got a hug from the Hall of Famer Jim Brown on his way to the stage, and teared up throughout his speech, faltering at times.

"You know, it was a great award and I had a great time in LA," Sam said. "But that's over and I'm focusing on football now."

Just as they did after the draft and during OTAs, teammates didn't seem to care that Sam was gay. Offensive lineman Demetrius Rhaney, taken the pick after the Rams created a stir by selecting Sam, had only compliments.

Quarterback Garrett Gilbert, drafted in the sixth round out of Southern Methodist, said there was plenty on his plate without worrying about Sam. Gilbert said this will be the seventh offense he's had to learn in eight seasons counting high school and college.

"When Mike got drafted he became part of our team, and that's what he is," Gilbert said. "We're both here competing, our jobs aren't guaranteed.

"He as well as the other guys in our rookie class are members of this family."

Coach Jeff Fisher will address the media for the first time on Friday after the first full-squad workout.

Sam knows he must improve across the board to make the team. The Rams already had one of the best pass rushes in the NFL, with stars Robert Quinn and Chris Long at the ends, before taking Sam in the seventh round.

Long was among those observing on Tuesday.

"It's not college anymore," Sam said. "That's child's play compared to this."

A little more than two dozen newcomers participated indoors. Sam thought it felt much like another OTA, but noted no one had pads on yet.

On Day 1 his biggest concern was mastering nuances of playing right end. He was the SEC co-defensive player of the year at Missouri rushing from the left side.

"I thought I did pretty good," he said. "Not totally satisfied because I haven't been on the right side in a few years."

At times, Sam had to try and get past Greg Robinson, the No. 2 overall pick of the draft who played a little tackle on Tuesday. Robinson, who'll begin his NFL career at guard, left the first workout feeling pretty good.

"It was definitely a positive feeling to have a jump start on camp," Robinson said. "I was kind of familiar with a lot of the plays that we went over today and it helped with the speed of the game.

"It helped me play a little faster."