Sam gets last chance at a preseason impression 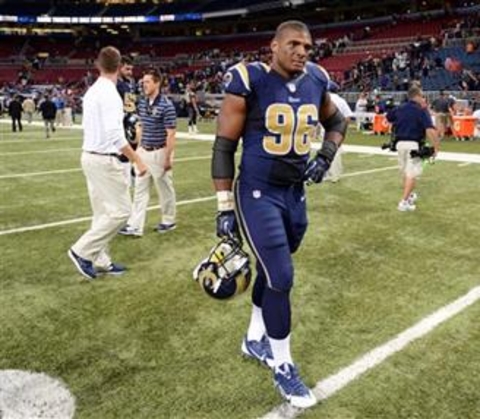 Miami Gardens, Fla. (AP) — Michael Sam is about to get one last chance to show the St. Louis Rams why he belongs on their 53-man roster.

For him — and everyone else on NFL roster bubbles — a preseason finale is anything but meaningless.

Sam and the Rams visit the Miami Dolphins on Thursday night, the last exhibition for both clubs and the last opportunity for players to state their cases before teams pare down their rosters to the NFL-mandated 53 by Saturday afternoon.

"I will be playing a lot more," Sam told the Rams' web site in a videotaped interview.

And that means he will have plenty of snaps to make one last impression. Starters are typically held out of preseason finales in most cases in order to avoid injury issues, and it's a virtual certainty that the Rams and Dolphins will be giving many of their first-stringers the night off.

So for those not assured of spots on the team, opportunity knocks. For the Dolphins, the biggest chance might be the one that'll be presented to running back Daniel Thomas, who hasn't appeared yet in the preseason because of a hamstring issue.

Thomas will play Thursday, and his spot on Miami's 53 is hardly assured.

"I feel like I have a lot to prove," Thomas said.

Dolphins coach Joe Philbin wouldn't say how many spots on that 53-man roster are locked up going into Thursday night — and wouldn't divulge how many starters will sit, either, but it's a very safe bet that quarterback Ryan Tannehill will be getting the night off.

"We're still making decisions on who's going to be the final members of this team," Philbin said. "It's an opportunity for these guys to show us what they're capable of doing in that game setting. . We'll have one more opportunity for that and they need to take advantage of it."

Rams quarterback Sam Bradford wouldn't have played for St. Louis in this game, either. Now he won't be playing for the entire season, with another tear to the ACL in his left knee ending the 2014 campaign before it could officially start.

Shaun Hill is now the Rams' starter, and it's not clear how much work St. Louis will want him to get Thursday, if any.

"He's disappointed for Sam," Rams coach Jeff Fisher said. "That's where his heart's at right now because he knows how hard he worked."

The Rams could also go out and swing a trade, but Fisher was adamant this week that Hill has the job.

Sam doesn't have that same assurance.

The NFL's first openly gay player is battling for a spot on St. Louis' defensive line, which just happens to be a position where the Rams are extremely deep. Sam has shown some flashes of great potential — his sacks of Johnny Manziel against Cleveland last week maybe foremost among them — but knows those plays alone won't win him a job.

"I've got to get better every week," Sam said.

Such is the mantra for bubble guys. If they don't get better this week, they might be looking for work next week.