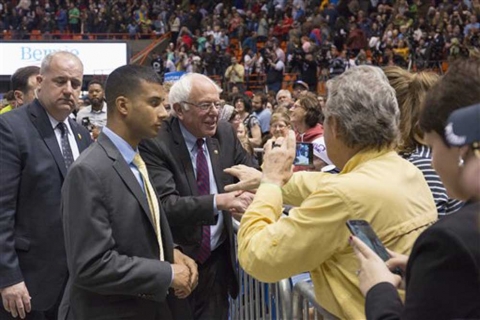 Sanders stopped to rally voters at the Taco Bell Arena on Boise State University's campus on Monday — a day before the Idaho Democratic caucus. It's the same location President Barack Obama stopped to campaign eight years ago during his successful Democratic presidential bid.

"I think it would be extraordinary in what is perceived to be a conservative state, stood up and said 'We are part of the political revolution,'" Sanders said to rowdy cheers. "Let's have a record-breaking night in Idaho."

Echoing many of the same themes he spoke about in Idaho Falls just days earlier, Sanders championed the need for free college tuition, addressing student loan debt and reforming the economy.

"It stuns me we have Republican governors working overtime to suppress the votes," he said.

In Idaho, the Democratic caucus is open to everyone, but the GOP primary is only open to registered Republican voters.

The Democratic candidate is trying to catch front runner Hillary Clinton, who has a strong lead in pledged delegates. She needs about 770 more delegates to win the Democratic nomination.

Clinton has not made a public campaign appearance in Idaho, but did send Olympic winner Michelle Kwan to speak last week on her behalf.

However, neither Sanders nor the crowd seemed deterred by the candidate's uphill challenge to become the party's nominee for the November general election.

Actress Susan Sarandon introduced Sanders after spending the day before campaigning for him in the Gem State.

For example, Idaho's Human Rights Act does not offer sexual orientation and gender identity protections. This means lesbian, gay, bisexual and transgender people are not protected from employment and housing discrimination.

"Bernie rings through loud and clear," Gaona Lincoln said. "He is fighting for the rights of gay, lesbian and transgendered people."