So far in Sochi, little talk of gay rights by athletes 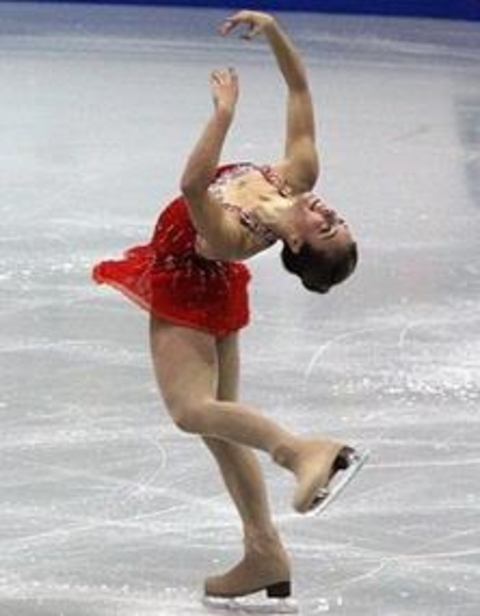 US figure skater Ashley Wagner spoke eloquently against the Russian anti-gay law before leaving the US, said "We're all so focused on the task at hand." Photo by David W. Carmichael / CC ASA 3.0.

Plenty of athletes made clear before traveling to Sochi how unhappy they were about gay rights being curtailed in Russia, particularly with its law banning gay "propaganda."

But now in Sochi, there has not been a squeak of public protest from the 2,870 Olympians — either at venues or at Friday's opening ceremony.

Outside the Olympic bubble, the plight of Russia's lesbian, gay, bisexual and transgender community continues to dog the games.

Gay rights activists who waved rainbow flags on Friday on Moscow's Red Square and protested in St. Petersburg were quickly arrested. Three sponsors of the U.S. Olympic Committee, led by telecommunications giant AT&T, have spoken explicitly against the Russian law. Google Inc. hinted its opposition by putting winter athletes and rainbow colors on its search-page logo.

But in Sochi, largely silence.

Olympians and coaches cite multiple reasons why they feel these Olympics are neither the place nor time — at least not early on in the 17-day games — to make a stand.

Competition First: Not unreasonably, priority No. 1 is to compete. Everything else is on hold.

"We're all so focused on the task at hand," said U.S. figure skater Ashley Wagner. In the United States, Wagner spoke eloquently against the Russian law. In Sochi, she still is happily and patiently answering questions on it. She said she has also "discussed it with some athletes."

"We have a great platform to really speak out about what we believe in, but also we're here to compete," she said. "I did my part as an athlete, and did enough to make myself feel good at the end of the day."

Skating coach Brian Orser, who is gay, said: "I've avoided most of these questions about it. I don't want to come across as a hypocrite but I also just want to be here for my athletes, just be here doing my job."

"I have my feelings about it, but I don't know if this is the time or the place to voice it, although we do have a big audience, and that's sort of important as well," he said.

Maybe Later: Once athletes are done competing, gloves could come off, especially if these are their last Olympics. That, at least, is the theory of LGBT activist Hudson Taylor, a wrestling coach at Columbia University who has traveled to Sochi to campaign. Taylor said he knows of "a handful of athletes who are interested in speaking out."

"I could see people feeling a little bit more comfortable, after they have gotten their main job out of the way, to speak their mind," said Wagner.

Not The Place: The mantra of the International Olympic Committee and many Olympians is that the games must be kept free of the political, religious and other schisms that divide the outside world. That philosophy discourages open discussion at the Olympics of any contentions non-sport issue, not just the anti-gay chill in Russia.

"I don't really feel like the Olympics is a place for that kind of politics," said U.S. skier Bode Miller, competing at his fifth games. "It's a place for sports and a place for cultures to kind of put aside their differences and compete."

"It's easy to get caught up in all the other stuff and forget what the Olympics is about."

Behind The Scenes: Some athletes say they are talking, but among themselves.

"We've been discussing this a lot, and it really just brings us athletes closer together. We all agree that there should be no discrimination," said U.S. cross-country skier Kikkan Randall.

But esteemed figure skating coach Frank Carroll said: "I haven't heard one single word about it. Not one. I don't see any flags or banners."

Keep Quiet: Some countries say they just don't want their athletes involved. Canada is one of those.

"We don't participate in any political debates and any controversy and anything else but sport," said Canadian Olympic Committee President Marcel Aubut.

Canadian Olympians get "a lot of training" on how to answer reporters and are made "aware of any trigger points," said Mike Slipchuk, who heads Canada's figure skating team.

"They're here to answer questions about their performance and what they're doing here," he said.

But on gay rights, "wars" and "everything," he said: "We're not here to be a spokesperson for those things."

"I'm focused on doing my job and, for the time being, doing what I need to do," he said somewhat robotically when asked for his opinion.

With a curt "thanks," a Canadian press handler tried to cut off a follow-up question before allowing Reynolds to reply.

"I think the athletes will be a little bit more free to talk about that after they have done competing," the skater said.

Afraid Of Trouble: IOC rules governing what athletes can and cannot say aren't as clear as they could be. Laid out in the Olympic Charter, they say all demonstrations and propaganda are banned at Olympic sites, venues and "other areas."

The charter says violators can be expelled, but that has "seldom if ever" happened, the IOC says. U.S. sprinters Tommie Smith and John Carlos were sent home for their 'black power' salute at the 1968 Mexico City Games, when they thrust their black-gloved fists skyward on the medal podium.

"At first we were like kind of afraid to speak about it, like you couldn't even say the word 'gay' at all," said U.S. speedskater Jilleanne Rookard.

Taylor, executive director of Athlete Ally, argues that the IOC's ban doesn't extend to social media. He expects athletes in Sochi will be "tweeting or sharing pictures about these issues, too."

Media Storm: Some athletes worry that taking a strong stand will draw swarms of reporters, which could break their focus.

"I just don't want to stir the waters and don't want to comment on any side of it. Then that's something that can turn into a distraction if you get hounded by the media," said cross-country skier Jessica Diggins.

"So I'm keeping myself out of that."

AP Sports Writers Beth Harris and Jon Krawczynski in Sochi and Dennis Passa and Howard Fendrich in Krasnaya Polyana contributed to this report.