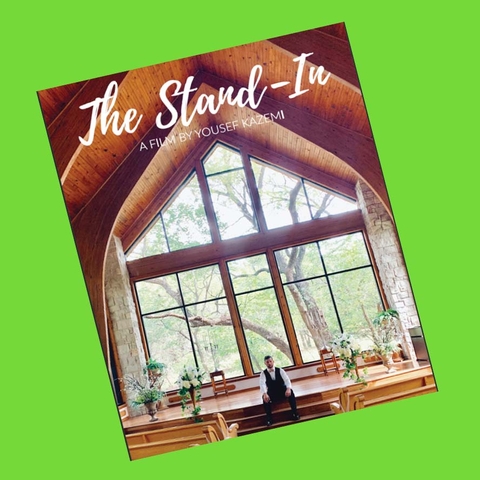 WeerNProduction and Windswept Media are proud to announce their latest work; The Stand-In will celebrate its world premiere at the 2019 deadCENTER Film Festival in Oklahoma City June 6-10.

Additionally, the film has recently been named an official selection and award nominee at Out Here Now: Kansas City LGBT Film Festival June 21-25.

The Stand-In is the latest project from Oklahoma filmmaker and Writer/Director/Producer, Yousef Kazemi. It is a short film that tells the story of Bryan, whose wedding to partner, Jack is turned upside down when his mother refuses to attend.

Kazemi found inspiration for the film, his sophomore effort, last summer when his mother shared a post on social media about Free Mom Hugs founder and fellow Oklahoman, Sara Cunningham.

Cunningham made international media headlines after her June 2018 Facebook post went viral in which she offered to be a “stand-in” mother at weddings for LGBTQ+ couples whose parents have rejected them. Cunningham’s story mirrored that of Kazemi’s mother who had previously been a “stand-in” mother herself for a family friend.

“When my mother shared Sara’s story on Facebook, I was immediately inspired to create The Stand-In,” said Kazemi. “Sara helped shine a spotlight on an idea that was right in my backyard. This film is a celebration of the local LGBTQ community and its supporters, including my mother and Sara, with whom this film would not be possible.

“I am honored to be able to share it with audiences at both deadCENTER and Out Here Now this year.”

Since her post made headlines, Cunningham has shared her story on numerous outlets, including The Today Show and the recent GLAAD Media Awards. She spoke alongside actress Jamie Lee Curtis who recently acquired the film rights to Cunningham’s autobiography, How We Sleep At Night, which details her journey as a mother of faith who once struggled with accepting her son’s sexuality.

As Executive Director of the non-profit advocacy group Free Mom Hugs, Cunningham is committed to advocating for authentic relationships between parents and their LGBTQ+ children. An ordained minister, Cunningham has a cameo appearance in The Stand-In.

“This film honors same-gender marriage and pays homage to mothers who have stood in the gap of fear and ignorance,” said Cunningham. “This is a story the world needs to hear, and by telling it, we’re helping put Oklahoma on the map as a safer, kinder and more loving place for the LGBTQ+ community and their families.”

In addition to Cunningham, the production boasts an award-winning cast and crew and features original music from acclaimed musician Matt Stansberry, whose new single Love Wins from his forthcoming EP is featured in the film.

“Love Wins is a song about acceptance, understanding and ultimately showing love for each other,” said Stansberry. “The song was written before the U.S. Supreme Court ruling in 2015 legalizing same-sex marriage, and originally, the track was recorded with a band, a horn section and female background singers.

“I never thought in a million years that the words of this song would tie to anything of significance. However, when the opportunity arose to discuss having the song featured in The Stand-In, I began working on how we could more clearly articulate the message behind the music. I’m so happy that the reimagined version of the song fits the film and its message.”

The Stand-In will premiere at the 2019 deadCENTER Film Festival with screenings on both Friday, June 7 at 5:30 p.m. and Sunday, June 9 at 4:15 p.m. followed by its showing at Out Here Now in Kansas City on Saturday, June 22 at 7:30 p.m. The film will continue its film festival run throughout the country during the 2019-2020 season.

For more information on The Stand-In, please visit www.facebook.com/thestandin.